ASTRO announces 5 treatments that may be unnecessary 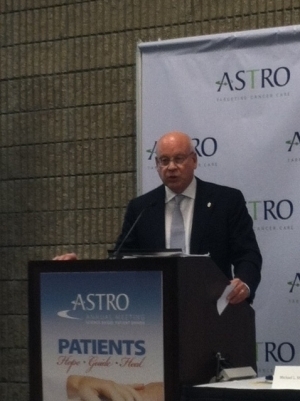 Dr. Michael Steinberg,
chairman of ASTRO's board of directors
giving an update on Choosing Wisely
at ASTRO 2013
ASTRO released a list of five radiation oncology treatments for providers to question using, as part of the nationwide "Choosing Wisely" campaign. The campaign seeks to encourage conversations between physicians and patients about potentially unnecessary tests.

The society's recommendations are:

The National Association for Proton Therapy released a statement in response to the guidelines.

"Patients and physicians have a number of options when approaching prostate cancer," says Leonard Arzt, Executive Director of the National Association for Proton Therapy (NAPT). "We believe that all options, including proton therapy, should be available through an informed decision making process. The choice of treatment will have an enormous impact on the patient's health and ability to enjoy his life. Patients have a right to know what is available to them."

The statement noted that in 2011 an expert panel from the American College of Radiology concluded that proton therapy is equally appropriate and as beneficial as IMRT, 3-D conformal X-ray therapy and brachytherapy in treating Stages T1 and T2 prostate cancer.

Most breast radiotherapy treatments have included five to six weeks of therapy followed by one to two weeks of boost therapy. But recent studies have shown equivalent tumor control in cosmetic results in certain patient populations in only four weeks of therapy.

PSA screenings for prostate cancer often detect cancers that may never cause a problem for the patient, a finding that led the U.S. Preventive Task Force to recommend against the screenings in 2011. Since then, medical societies and radiation oncologists have urged providers to monitor some cases of cancer rather than jumping right into radiation therapy.
1(current)
2