What does UDI mean to the medical equipment industry? 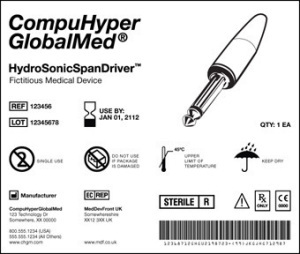 What the UDI
could look like
(courtesy of the FDA)
A lot of people have been talking about UDI. Not only did the U.S. Food and Drug Administration just issue final rules about the requirement for medical device companies, but two weeks ago, I attended the IAMERS meeting in Prague where Wayne Webster, Robert Kerwin and Mike Schmidt gave a presentation on the subject. It was really very interesting and I thought I would share what I learned.

The government is not going to track where individual serial numbers are, but the idea is to make it possible to maintain traceability for the purpose of recalls and safety, for incident reporting and, of course, to promote regulatory harmonization.

Eventually, there will be a giant database of all of the different products with information about: how big they are, how much they weigh, what they do, what they look like, and how many have been sold.

It is going to start with implants, pacemakers and other high-risk (Class III) medical devices, and hopefully be implemented within the next six to twelve months. It will take three to five years for equipment like X-ray machines, CT scanners, MRI machines and other Class II items to be fully integrated into the program. The Office of Management and Budget will be charged with implementing this in the United States.

Rob Kerwin pointed out the excellent job that IAMERS has done to remind the authorities that they are going to have to consider how they deal with used equipment. I have to give a lot of credit to IAMERS for this because they took the time to raise a question that no one thought about.

Moving on with the IAMERS briefing, the next person to speak was Mike Schmidt, who explained some of the practical aspects of UDI, including the two numbers every machine will have, or the model number and serial number.

All this is about "traceability" and "harmonization."

It is not that the government is necessarily going to be tracking individual machines and where they are. Although at some point, I would not be surprised to see that happen. But if there is a recall or a safety issue, it will make it easier for everyone to receive notice that all of the machines from within a certain serial number range need to be modified or changed.
1(current)
2