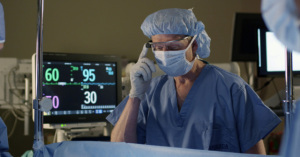 Anesthesiologist Dr. David
Feinstein at work with Glass.
Dr. David Feinstein speaks to his Google Glass with ease, as if it had always been perched on his nose. "OK, Glass," he commands. "Check vital signs, bed four." Patient information slides by in the upper right corner of his vision as he makes his way through the hospital back to the operating room, then leans over his patient.

Feinstein stars in a video created by Philips Healthcare to showcase the company's plans for Google Glass, the high-tech wearable display that looks like a pair of goggles outfitted with a chip in the right corner. That chip allows the wearer to call up information, make a video recording, or do anything a smartphone or tablet can do, all by using simple voice commands.

Philips is collaborating with Accenture Technology Labs, a tech consulting company, and Google to bring Glass to health care, hoping to use the technology to help improve workflow and ultimately, patient care. In the video, Feinstein showed how physicians would be able to gather patient stats without turning their heads to a monitor.

"The patient monitor isn't always ideally situated to allow the provider to perform the procedure while also seeing the patient monitor," Dr. Tony Jones, vice president and chief marketing officer, patient care and clinical informatics for Philips, told DOTmed News. "Bringing some of the basic vital signs info from the monitor directly into the field of vision via Google Glass allows the provider to do the procedure and view the feedback data without taking their eyes off of the patient. It sounds simple, but small workflow improvements like this can reduce errors and have a significant impact on patient care."

When Philips decided to explore Glass's application in health care, the company approached Accenture to help demonstrate Glass in a clinical setting. The team transferred the mobile apps it developed for its IntelliVue patient monitors on to Glass to allow the doctor access to patients' EHR and other hospital information.

Besides being used to pull up patient data, the team also envisions Glass being used to record tricky surgeries for educational purposes. Google Glass allows users to share what they see as a live video feed, a feature the team hopes will be used during emergencies to help connect relief workers with physicians at a hospital.

"In an emergency situation, the physician can help guide the first responder using video," said Brent Blum, wearable display lead at Accenture. "Then the physician would be notified when the patient reaches the hospital, and have access to all of his charts."

And while the technology may look like it was dropped off on earth from a more advanced planet, Blum said Dr. Feinstein, at least, didn't find the technology too alien. "There's a five minute tutorial, but it's really as intuitive as any other mobile device," said Blum.

Now that Philips has released its proof of concept, the company is in the middle of collecting feedback on the next best steps for bringing the futuristic technology to hospitals.