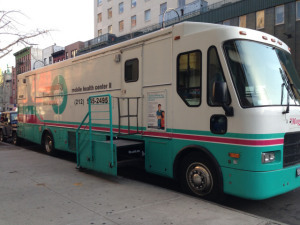 On Tuesdays, the Community Healthcare Network health clinic mobile parks at Union Square, where its staff fights for bandwidth with slews of students busy on connected devices in the Wi-Fi enabled park.

The mobile offers free HIV, STI and hepatitis screenings, as well as pregnancy tests. But it doesn't just provide access to tests for patients without insurance - it also connects them to a larger health network using EMRs.

If screenings discover a medical problem, or even a surprise pregnancy, an appointment can be made at one of the 12 CHN clinics right from the mobile using electronic medical records.

"We do a 20-minute test for HIV and hepatitis C, and then if a patient is positive, she walks away with an appointment for any clinic in Manhattan, Queens, the Bronx or Brooklyn," Freddy Molano, vice president of HIV programs and director of the mobile program, told DOTmed News.

Though the mobile has been using EMRs since 2008, it sometimes still experiences connectivity challenges, especially around always-busy Union Square.

"Sometimes it's really slow, which is tough for patients who have to wait," said Molano. "We're trying to find a way to get better dedicated service in the mobile."

Molano has been running the mobile health service for 20 years. He started the program to expand HIV testing to women and other groups, and now speaks around the country on AIDS issues.

As for the mobile, when it's not parked on 14th Street, it's helping patients on Christopher Street or traveling to other boroughs, where brick-and-mortar clinics can be harder to come by.

"In Coney Island, you can walk and walk and rarely do you see a health center," said Molano. "So every year I take the mobile to Coney Island or Orchard Beach. People will say when you go to the beach you don't want to get tested, but we found positives." He said the clinic found three HIV positive patients just in the last month.

The mobile is also an important resource for patients who may not want their information recorded, even if the EMR system makes it possible.

"It's for the MSM [men who have sex with men] community, and for teenagers who are pregnant who don't want to go to standard clinics because of confidentiality issues," said Molano. "We also see a lot of sex workers down on Christopher Street who have not been tested."

Thanks to fundraising efforts, CHN will be able to add an additional mobile soon, Molano said.

"It's an alternative to the emergency room, especially for the immigrant community, and it's a safety net," said Molano. "Even with health care reform, it's still very much needed."