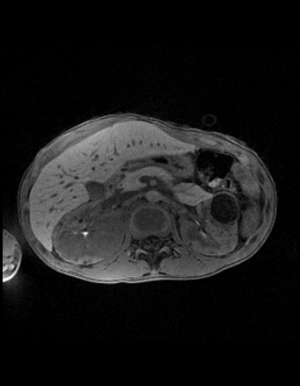 Improved image quality
in liver imaging with StarVIBE,
part of Siemens' FREEZEit package
Siemens Healthcare hopes to give MRI the push into body imaging that has been a long time in the making. At RSNA 2013, the company is releasing new MRI software sequences for liver that it believes will be the first step toward growing body MRI.

"To make body MR available to the general population and also to big and mid-sized hospitals, we believe technology is needed to make it faster and more reliable and robust," Bernd Ohnesorge, CEO Magnetic Resonance at Siemens Healthcare, told DOTmed News.

MRI is mostly used to image the brain and musculoskeletal system. On average, only one patient per day per MRI scanner in the U.S. receives an MRI for a body application, which can include imaging the pancreas, liver or other organs in the abdominal area. The main reason, according to Ohnesorge, is that up until now, MRI for this area has been far too slow to obtain reliable and accurate images.

But technology could very soon help. Siemens' new solution, called FREEZEit, will be able to image the entire abdomen in about two seconds — enough time to freeze motion even if there is free breathing contrast-enhanced MRI. Motion has been a big obstacle with body MRI.

Since image acquisition time is much shorter with Siemens' new technology, patients won't have to hold their breath more than necessary. Even for very sick, elderly or pediatric patients who can't control their breathing, reliable images can be created, according to Ohnesorge.

"In the past, it was common that smaller lesions would have been missed either through motion or through missing timing of its enhancement, and now you have an accurate snapshot where you really freeze motion in consecutive time points, [so] that you can capture all the information of different lesions that you might need to image," said Ohnesorge.

Dr. Diego Martin, chairman of the department of medical imaging at the University of Arizona College of Medicine, will be the first to admit that MRI is a complex modality. For the past decade, he's been working with the core engineering team at Siemens to develop this technology that he hopes will bring immense value to MRI.

"X-ray might not show you there's a liver tumor. CT may or may not see a liver tumor but when it does, we can't say what it is. But with MRI, it's rare that we can't tell you what it is — that's called specificity," Martin told DOTmed News.

And specificity is needed when imaging the liver. Tumors in the liver, while common, are usually benign, and an imaging test with a high specificity can distinguish the malignant tumors from the benign. Martin said MRI's diagnostic specificity has even been shown to exceed that of a liver biopsy.

"Specificity and accuracy of MRI when used appropriately for the liver reaches 90 percent — and that's a high rate in medicine," said Martin.

He sees immense growth potential for body MRI with this new application, especially given the rising numbers of obese patients and the associated liver diseases.

Siemens' FREEZEit technology received U.S. Food and Drug Administration approval in early November and will be available on the company's main innovation platform, the MAGNETOM Aera 1.5T MRI and the MAGNETOM Skyra 3T MRI. It will be ready for shipment in the summer of 2014.