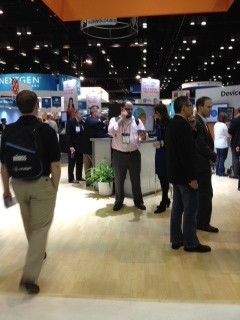 Gpogle Glass
at HIMSS14
If HIMSS is not on your radar screen, then you're out of touch. Attendance was way up this year with 38,828 participants in total, compared with 34,500 in New Orleans last year.

There was also a significant jump in exhibitors. 1,233 this year -- a 7 percent increase from last year. Of note is that 400 were exhibiting for the first time this year.

At the show there was a big emphasis on integrating data, diagnostics, RTLS and population health. We had two writers at the show this year and they were both exhausted by the end of the day.

One interesting observation: While RSNA was very international, for the most part, attendance at HIMSS was domestic.

We believe that health IT is going to play a much bigger role in health care going forward. If you follow my blog, you know that I speak often about costs going up and how we're going to cope with it. Well, I feel health IT is one of the answers. Going forward, HIMSS is going to lead that transformation in many ways.