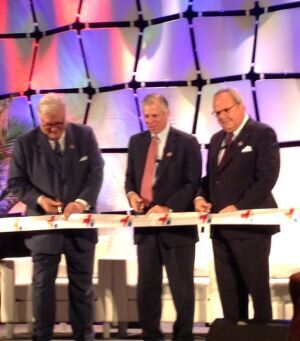 The show, four years in the making, formed through an unusual partnership between the German-based Messe Dusseldorf and the Texas Medical Center. Messe Dusseldorf has for decades been hosting Medica, one of the world's largest medical shows.

"It was a good match because they [Texas Medical Center] were looking for a partner to promote what they were doing here, and we're looking for a new market for Medica shows," Horst Giesen, director of Messe Dusseldorf, told DOTmed News.

Messe Dusseldorf hosts shows all over the world, but Medical World Americas will be the organization's first North American-based medical trade show.

Registration figures were not yet available by the time this story went to press.

According to Dr. Robert Robbins, president and CEO of the Texas Medical Center and chairman of Medical World Americas, roughly 32 countries were represented at the show this year and 33 U.S. states.

In addition to an exhibit hall component, the conference had a strong emphasis on education with many panels focused on cancer, cardiology, health information technology and disaster preparedness for hospitals.

Most of the speakers came from the Texas Medical Center and other hospitals around Texas.

With much of the attention focused on cutting edge medicine coming out of the Texas Medical Center, major themes many of the speakers touched on included personalized genomics as well as big data and health information technology — and where all of this fits into a more personalized approach to medicine.

"There's got to be a better way," said Dr. Jack Gill, a professor at Rice University, speaking at the opening plenary session. He said the potential of biomedical advances and personalized gene therapy would be able to help determine which of the many cancer drugs would be able to work best with which patients. MD Anderson Cancer Center is in the middle of creating a tool that could do just that.

Dr. Rivka Colen, assistant professor of diagnostic radiology at the University of Texas MD Anderson Cancer Center, spoke about brand new concepts in imaging — the focus of her current research efforts. She said these newer fields in imaging, called radiomics and radiogenomics, or imaging genomics, have the potential to aid in biomarker and drug development for cancer.

"We are developing MRI as a screening method to discover clinically meaningful genes and then submit them for commercialization," she said. Next, she will begin to look at PET imaging in a similar capacity.

Her research team has been able to extract 650 different features from the image of a tumor and then take the same approach as genomics, using predictive modeling with the ultimate goal of better clinical outcomes for patients.