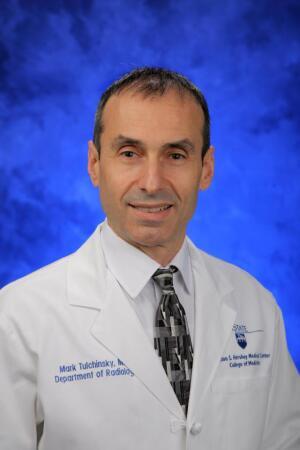 Dr. Mark Tulchinsky
Radiopharmaceutical firm Jubilant DraxImage is in the hot seat after hiking the price of two commonly used radiotracers, with the price of one increasing more than 2,000 percent.

The company increased the prices of macroaggregated albumin (MAA) and diethylenetriamine pentaacetate (DTPA), which are used for ventilation/perfusion (V/Q) scans, most often used to help diagnose or rule out a pulmonary embolism, or a blockage of an artery in the lungs, often by a blood clot.

Dr. Mark Tulchinsky, professor of radiology and medicine and associate director of nuclear medicine at Penn State Milton S. Hershey Medical Center, said his facility saw the price of an MAA vial increase from $26 to $561 after April 1. The price of a DTPA vial increased from $23 to $172. Prices vary from facility to facility based on agreements negotiated with pharmaceutical companies.

Tulchinsky said he worries that, given the increased expense for performing a V/Q scan, CT Pulmonary Angiogram will be favored, increasing radiation exposure to patients, which would lead to increased risk of breast cancer down the line for young women. He noted that 60 percent of patients evaluated are women, with more than a quarter of them under 40.

"That's what troubles me the most," Tulchinsky said. "What we should be working on is making V/Q more appealing."

Tulchinsky said he is also bothered by the fact that the company didn't do more to contact facilities in advance and that "nothing substantive was done or shared with" members of the Society of Nuclear Medicine and Molecular Imaging. Jubilant DraxImage posted a letter about the price increase to its website at the end of February, and Tulchinsky said the timing made it harder to prepare the department's budget for the next fiscal year.

Last September, Jubilant DraxImage announced a shortage of MAA, used in the preparation of Technetium Tc99m albumin aggregated injection. Then, in the Feb. 25 letter posted to its website, the company announced the one-time price adjustment to MAA and DTPA, also used for the preparation of Tc-99m.

In a video message to customers posted to the company's website April 25, Jubilant DraxImage President Martyn Coombs said the decision was based on sustainability of the supply chain. The company has been "losing money on MAA for many, many years, and we were faced with the position where as well as losing money on every vial, we had to invest a lot of money to keep the product on the market," Coombs said.

The company was faced with a decision to either to stop manufacturing MAA or to invest more money, Coombs said. To do that, they needed to increase the price of the radiotracers. Coombs said the company would invest the extra money in the manufacturing process, "to make sure we have a reliable, robust process and we don't have the same shortage situations we had before."
1(current)
2