Coils: an array of channels to choose from 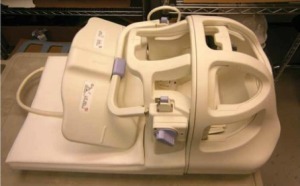 When the early commercial MR scanners came out in the mid-‘80s they were single channel systems; one transmit and one receive. Since then, coils have been in a perpetual state of growth and development, and it’s all about signal to noise ratio (SNR). HCBN spoke to Randy Jones, the president of ScanMed, about the evolution of coils.

“Coils were rudimentary designs of a single resonator; a conductor loop with some capacitor on it attached to a cable,” says Jones, “You’d put that next to the part of the anatomy you wanted to scan, and voila! You’d get better imaging quality.”

Jones says GE brought the first four channel scanner to market in the ‘90s, and singlechannel coils gave way to various geometric coils, like bird cage coils. Geometric coils evolved into multiple and switchable arrays, which have more than one resonator and more than one element in a single package. Multiple elements added new quality and speed to the application of MR imaging.

“I believe the word array was borrowed from World War II technology,” says Jones. “It referred to a geometric grouping of antennas used to focus electromagnetic sensitivity profiles in early radar development.” Jones says those arrays can still be found all over the world for air traffic control amongst military applications.

Channel density: when is enough, enough?
Stuart Clarkson, the senior director of MR business with Siemens says, “It became apparent in the early ‘90s that the more coils you can put inside one of these receivers, or antennas, the better the SNR could be.” With more coils come more channels, “If I had four copper windings that were built inside one coil, that would give me the ability to get higher SNR,” says Clarkson, “but I would need four channels to look at the independent data coming from each element.”

Today Siemens is at the forefront of high end channel density exploration. Their new scanner, the MAGNETOM Prisma 3T, has 128 channels and an 80/200 gradient coil, making it a truly top of the line scanner, particularly for imaging the brain.

When asked if channel density ever becomes sufficient and stops resulting in better outcomes, Clarkson says, “Probably, but if you ask two different people you’ll get two different answers. It’s certainly not a linear scale, doubling the channels does not result in an image twice as good.”

Clarkson also explained that the availability of 128 channels is a kind of investment in the future, because although no coil currently requires 128 channels, one probably will before an end user is ready to replace their Prisma. He says it was only six or seven months ago that the FDA approved their 64-channel head coil.
1(current)
2
3
4