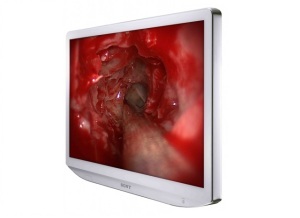 Sony Medical's new 27 inch monitor
On Thursday evening, Sony hosted a press conference to unveil a sleek new surgical monitor. The event took place at the Sony Club on the top floor of Sony's New York headquarters, and included an overview of the monitor's specs, a performance demonstration, and insights from a panel of minimally invasive surgeons on the significance of better visualization technology in the operating room.

The monitor's 27 inch viewing area makes it slightly larger than most monitors on the market, but it is compact enough to fit the same chassis footprint as most 26 inch monitors, so many facilities will be able to use them on their current carts or boom arms. The monitor can also be ceiling mounted and is built for ease of use, featuring a thin bezel and minimalist design. A surgical procedure played on loop throughout the conference and, while the footage was not for the faint of heart, the image quality was undeniably exceptional.

Although Sony has 29 years experience in the medical industry, Julie Holodak, senior manager of product marketing, opened the event by acknowledging that most people associate them with entertainment. After listing off several new, big budget movies utilizing Sony equipment, she said Sony has an initiative to take their technology "from the movie theater to the surgical theater." As one of their panelists later explained, that is a time-honored approach to innovation.

Dr. Steven Palter, Founder and Director of Gold Coast IVF said, "If you look at the history of surgery since 1900, all innovations came from entertainment technology." The first films were recorded by the Lumiere brothers and a couple years later, said Palter, the same cameras were used to film the surgeries of Dr. Eugène-Louis Doyen. "In the 1930's they made Gone with the Wind in color and then came color surgical videos."

A surgeon can only perform as well as she can see

Imaging technology and minimally invasive procedures are dependent on one another. Dr. Dennis Fowler, director of clinical and regulatory affairs at Titan Medical Inc, recalled a time before that was the case. "The first 10 years I did surgery we made bigger incisions in order to see better," said Fowler.

Despite the myriad benefits of imaging technology, Fowler said those breakthroughs deprived surgeons of a lot of sensory feedback. They could no longer feel things or perceive depth. The technology literally came between the surgeon and the patient. "Everything that's happened since 1990 has been to restore sensory input to the surgeon and every iteration of better imaging brings us closer," said Fowler.
1(current)
2