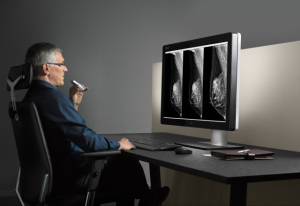 Barco's Coronis Uniti
Barco announced today the release of its diagnostic display system — Coronis Uniti — which is the first system that's designed to integrate both PACS and breast imaging, according to the company. It has a 12 megapixel color screen and the company claims that it has a higher resolution than any other system currently on the market.

"As the demand for diagnostic imaging services increases, radiologists are tasked with growing workloads and PACS administrators are struggling with workflow issues — with the challenge of managing more patients, more studies, more images and typically doing so with fewer resources than they ever had before," Piet Candeel, senior vice president and general manager of health care at Barco, said in a conference call.

Barco recently published a survey conducted by The MarkeTech Group that interviewed 200 radiologists from North America and Europe and found that the main challenges they face today are the rise in image volumes, the increasing complexity of cases and physical discomfort while reading. Barco decided to design their new display system with solutions to those challenges in mind.

Today, you will often find a workstation that has some color displays, some gray scale displays for breast imaging and maybe a navigational display. "People today who are doing routine diagnostic mammography, are literally dragging the study from one to the other because they have to work between the two environments and here we unify that environment," Albert Xthona, senior product manager at Barco, said in the conference call.

The new system accomplishes unification of that environment by calibrating color and gray scale, 2-D and 3-D and static and dynamic images.

The system has built-in technologies to enhance the radiologists' reading experiences including the RapidFrame technology, which makes sure that the moving images are kept crisp and in-focus. Meanwhile, the Optical Glass technology makes the images sharper and reduces reflections.

In the MarkeTech Group's survey, 87 percent of radiologists said they experience eye fatigue or back pain when reading images. Barco designed the new system to align with the radiologists' natural field of vision so that they don't have to move their head and eyes.

It has a technology called SoftGlow that brings ambient light into the room and shines a light on paper and film folders simultaneously. It also has a bright display, so that it can be used as a lightbox.

It will be on display at the Journées Françaises de Radiologie conference in Paris, France from October 17 to 20 and also at RSNA in Chicago from November 30 to December 5.