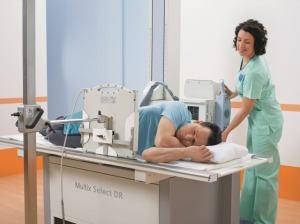 Like many industries, radiography continues to be an employer’s market. The number of budgeted full-time radiography employees per facility has declined over the last decade, from an average of 10.1 in 2003, to an average of 9.2 in 2013, according to a recent survey by the American Society of Radiologic Technologists. Also in 2003, 10.3 percent of the positions in radiography went unfilled, versus just 1.7 percent last year.

In a study published in the Journal of the American College of Radiology in January, researchers analyzed the ACR job board between October 2010 and June 2013 and found that on average, there were twice as many job seekers as jobs each month.

At the same time, the number of people taking the certification exams has declined. Slightly more than 13,000 people took the 2013 exams in radiography, nuclear medicine technology and radiation therapy for the first time, with the numbers trending downward since 2008. Still, it’s probably no surprise that radiography remains the most popular discipline.

Shift to digital in education
While radiography hasn’t changed much since X-rays were discovered in 1895 by Wilhelm Röntgen, how technologists capture the final images certainly has. That change has been accompanied by a shift in the education of technologists.

Joey Battles, director of Educational Eligibility at the ARRT, says an overexposed radiograph, which would look dark on film, can still look good with digital, and Battles says it’s become a trend to overexpose patients to radiation and then lighten up the image for the radiologist,though manufacturers have been combating “dose creep” with image processing and dose tracking software. “People used to learn optimal techniques because you couldn’t change the image,” Battles says. “You still want to evaluate your patient and use the optimal techniques from the get-go.”

According to a 2012 white paper on best practices in digital radiography published by the ASRT, technologists should select the appropriate exposure technique factors — including kV and mA, exposure time, and the X-ray source-to-image distance — for the patient’s size and condition.

There are 850 radiography specific education programs, including a little more than 100 hospital-sponsored programs, in all 50 states and Puerto Rico, according to the ARRT. A true radiography program is 24 months of full-time education, including clinical time, whether it’s an associate’s or a baccalaureate degree program. For the clinical component, hours range from low of 1,200 to a high of 2,000. Generally, hospital-based programs have more clinical hours.
1(current)
2
3
4
5
6
7
8