MEDICA 2014 live update: wearing your heart on your sleeve 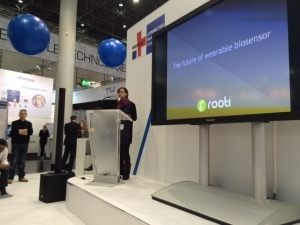 Sue Chuang presents
The first day of MEDICA, the largest international medical trade show in the world, kicked off Wednesday morning in Dusseldorf. Seventeen massive halls were filled to capacity with attendees exchanging ideas, breakthrough technologies, and questions regarding the future of health care. At the Connected Healthcare Forum the conversation revolved around the game-changing potential of wearable technology.

One voice featured in the forum was Rooti, a company from Taiwan. Sue Chuang, co-founder Rooti, opened her presentation with a video of a man stricken by a heart attack while watching television. The video then takes the viewer back in time to show if he had been wearing his W/Me 2 biosensor, it could have detected the signs of danger and prompted him to take his heart medication before disaster struck.

The W/Me 2 sensor, (like Rooti's W/Me armband before it) monitors heart rate variability (HRV) and contextualizes changes brought about by fatigue, stress, sleep quality, and breathing rhythm, to ultimately assess the wearer's health and work with them to improve it.

That objective of accumulating data through continuous monitoring in the interest of improved health permeates most of the wearable biosensor company philosophies. But one thing that stuck out about Rooti was the emphasis on user appeal. The company recognizes that as long as these new devices, which are not by definition "medical devices," are going to be utilized, they need to be attractive to the users.

Rooti's W/Me 2 can be embedded into a shirt, clipped to a collar, worn on a wristband, or even applied as a patch. "An easy and happy user experience, plus the functionality - collecting your vital signs - will make preventative care smarter," said Chuang.

Rooti is also manufacturing an environment monitoring wearable called CliMate, which interprets data about the weather as it pertains to the wearer's personal health conditions. CliMate processes humidity, temperature, and UV index in a personalized way that considers factors such as skin tone and how often the wearer should apply sunscreen.

CliMate is a wearable that works through smartphones. The layout resembles the iPhone weather app in some ways. Instead of showing rain or sun however, the program shows a plant which represents the wearer responding to the external conditions. "When you're protected, the plant flourishes. When you're exposed, it withers away," said Chuang.

The Connected Healthcare Forum featured no shortage of iPhone analogies. Several of the speakers called upon the iPhone, (and in some cases Android) as a way of illustrating the simplicity and ease-of-use of their wearable products. There were other themes that emerged as well, such as prioritizing long battery life, the customization of who can access the data from the cloud, and the logistical challenges in merging sick care with health care.

Chuang says Rooti is looking for ways to integrate their environment sensing CliMate program with the wearable biosensing capabilities of W/Me 2. They are also looking for new partners to collaborate with, and if the first day of MEDICA was any indication, they've come to the right place.