Blurring the lines between visitors and exhibitors at MEDICA, a chat with Joachim Schaefer 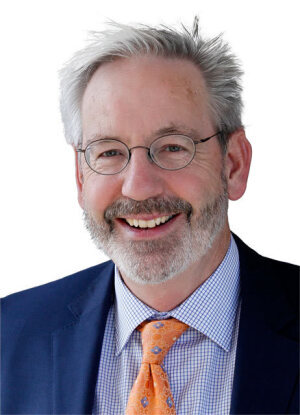 Joachim Schaefer
managing director of Messe Dusseldorf
The magnitude of MEDICA 2014 is difficult to convey to someone who wasn't there or hasn't been there in previous years. Starting on November 12th, 4,831 exhibitors (plus an additional 724 at the adjacent COMPAMED) spent a few intense days presenting their medical innovations to almost 130,000 visitors.

The event takes place in Dusseldorf, Germany, but more than half of those attendees traveled from 120 countries throughout the world.

All those visitors and exhibitors spread themselves throughout 19 halls and 130,000 square meters of booth space, food stands and educational forums. On Thursday the 13th, the busiest day of the show, DOTmed News caught up with Joachim Schaefer, the managing director of Messe Dusseldorf. He wanted to know if we had worn the right shoes.

The reasons for exhibiting at MEDICA are not always the same, but the opportunity to network with innovators, share ideas, seek investors, and nurture business partnerships are all likely factors. Schaefer explained that MEDICA is in a unique position now where they cannot grant everyone a booth who wants one. There simply isn't room to accommodate the demand without compromising the quality and cohesiveness of the show.

"It's an interesting problem to have," said Schaefer, "because with most of our shows we have the room, so it's the more the merrier." With MEDICA, considerations need to be made to tailor the exhibitors to the interests of the attendees.

"We're trying to maintain a certain clusterization that is not perfect but there are, in various halls, different types of technology," said Schaefer. When a space opens up, the themes of the surrounding area play a role in determining who will be able to fill it. Halls 9-14, for example, feature electro-medicine, medical technology, operating technology, and equipment.

So, provided someone is able to secure space, how does one make the most of it?

"It really depends on what field you're in," said Schaefer. "Will you be in the American Pavilion group? Will you get certain promotional assistance or will you be on your own? Do you have relationships in the marketplace?" Interfacing as much as possible with the regional operation, (for the U.S., that's Messe Dusseldorf North America in Chicago) is probably the single best way to prepare for the show.

Getting out of your shell

Ultimately, Schaefer said the lines distinguishing attendees from exhibitors are rightly blurred. The exchange of ideas that MEDICA facilitates is a cooperative partnership between both parties. "If you have a compelling product but aren't exhibiting, then come as an attendee," suggested Schaefer. "Bring your stuff, peddle it around a little bit to people who work in the same space you do."

Instead of showing as an exhibitor, an attendee could theoretically network in this fashion for a year or two and then build up toward exhibiting. "You can cultivate cross-marketing relationships," said Schaefer. "There are many ways to play this game."

Trains and hotels were buzzing with the show and business cards were constantly trading hands, which is to say MEDICA truly takes over the city. "Every second person you see in town has something to do with MEDICA," said Schaefer, "and the most curious combinations of people have evolved out of a meeting like this."

And yes, to cover so much ground in such a short period of time, comfortable shoes are a must.