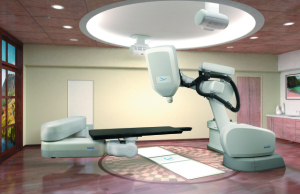 Accuray's CyberKnife
The 2014 edition of the National Comprehensive Cancer Network includes stereotactic body radiation therapy (SBRT) as a treatment option for prostate cancer. The American College of Radiology has also updated its own Appropriateness Criteria to recommend SBRT as an option for early stage prostate cancer. For Alliance Oncology, whose health care network includes more than 30 radiation therapy centers, that is impactful news.

Over the summer, several stories popped up regarding Alliance Oncology's CyberKnife facilities. Some of the news had to do with increased demand for the treatment while others were regarding innovative new protocols. DOTmed News decided to catch up with three of those facilities and see how things were going.

Columbus CyberKnife, a service of Mount Carmel St. Ann's Hospital and a member of Alliance Oncology, treated its 1000th patient this summer. That facility started treating with the CyberKnife four years earlier, and is currently one of only four CyberKnife facilities in the entire state of Ohio.

With more clinical evidence recommending the treatment, Columbus CyberKnife indicated their expectation to see an increase in the number of prostate patients coming through their doors. We recently asked them how those predictions were holding up.

"Prostate cancer is the third most treated disease at the center," said Tracey Wilcox, Columbus CyberKnife administrator. "For the eight-month period from January 1 to August 31, 2014, total prostate cancer treatment volume has increased more than 50 percent compared to the same time frame in 2013."

Wilcox attributes the increase to not only the growth of clinical research and data, but also increased support from health care industry organizations and modifications to commercial insurance policies.

"These factors have helped increase physician familiarity with CyberKnife SBRT," said Wilcox, "and the growth of supporting data has provided evidence of the treatment's efficacy for physicians, increasing their comfort level with referring patients for this type of treatment."

Despite unprecedented interest in the treatment, Wilcox says their CyberKnife is still fully supporting the patient demand and the facility does not foresee needing additional platforms any time soon.

Developing a protocol for liver metastases at Illinois CyberKnife

At the Illinois CyberKnife, a department of Advocate Lutheran General Hospital, treatment plans are being developed to eliminate liver tumors that metastasize from colorectal cancer. Liver metastases have been long regarded as incurable, and treatment instead focused on palliative care. But an aggressive and localized protocol using CyberKnife may be changing that.
1(current)
2