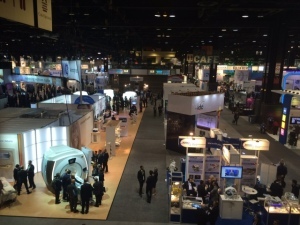 A busy opening day
at RSNA 100
Philips Healthcare now has exclusive licensing rights to Unfors RaySafe's Patient Dose Management System S1, according to an agreement the companies announced at the kickoff of the 100th meeting of the RSNA.

In February, Fluke Biomedical announced their acquisition of RaySafe. As DOTmed has already reported, that agreement provided RaySafe with substantial backing in exchange for giving Fluke Biomedical a radiology expertise. The transaction with Philips will similarly accelerate the market reach for the S1 system, except in this case RaySafe will no longer retain the product.

Magnus Kristoferson, CEO of RaySafe, told DOTmed News that the company had spoken to several of the major OEMs before finding the proper fit with Philips. Having reached this agreement, Philips will now be allowed to rebrand the technology as they see fit while RaySafe and Fluke Biomedical will continue moving forward with their own products, such as the X2 radiation measuring solution.

The S1, which was launched in 2013, is a cloud-based dose tracking system that addresses radiation management for patient safety. It creates a database for dose documentation which may inform physician decision-making while also emphasizing the lowest possible dose for the best image quality; key issues in the current health care reform climate. With Philips, the technology acquires a sizable footprint.

"We are committed to providing innovative products and offerings to help avoid unnecessary risks," said Kristoferson in a press release. "Moreover, we believe that only a holistic approach to radiation safety can effectively reduce unnecessary radiation exposure to patients and medical staff."

"This focus on mutually beneficial relationships is at the core of our approach to growth," said Eric Conley, GM of Fluke Biomedical.

The agreement comes, perhaps, as a logical next-step in an already developed relationship. RaySafe and Philips have been business partners for some time, having worked together on the Philips DoseAware product line.