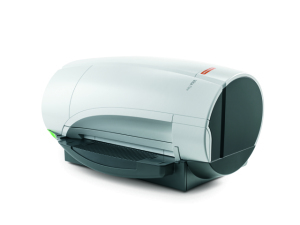 The Vita Flex CR
from Carestream
With so much cutting-edge technology on the floor at RSNA 2014, it can be rare to stumble across a new machine designed with a regular hospital’s budget in mind. Such was the case at Carestream’s booth where, among other things, they exhibited their newest computed radiography (CR) system, the Vita Flex CR.

While digital radiography (DR) may be the gold standard for modern X-ray imaging, CR imaging is a giant leap forward from the film-based systems that some hospitals are still using. The benefits are well documented; digital catalogues, higher resolution, automation, and increased throughput, among others. With the Vita Flex CR, Carestream hopes to take those benefits and fix them to a price point that a smaller hospital or private practice can contend with.

“In case the customer has service problems, we’ve simplified the system and reduced it into three parts that can be disconnected and replaced,” said Steve Lasher, technical training specialist for Carestream. The three parts are the power supply, the transport system, and the CR shell itself. With remote diagnostics, Carestream can automatically service the machine and determine if a component needs replacing.

The single cassette system, which bears some aesthetic resemblance to a typical laser printer, can process five different cassette sizes, ranging from 8 x 10 inches to 14 x 17 inches. It also comes with a choice of two throughput rates, either 30 or 45 plates per hour, and runs on the same Image Suite software as other systems in the Vita CR line of products.

“The other benefit to this is the reduced footprint,” said Lasher, “The system can be in the horizontal position or flipped up so the cassette can be entered at a 90 degree angle.” That versatility could make the Vita Flex CR a desirable option for smaller hospitals or even mobile imaging operations.

There is also a veterinary version of the Vita Flex CR that comes with its own specialized software and cassettes. The veterinary industry has trailed behind in the adoption of computed radiography and remains largely dependent on film X-rays.

Although part of the fun of attending RSNA is witnessing the frontier of scientific progress, those innovations don’t always address the real demands of modern health care. “This system is designed for smaller clinics and costs a lot less money,” said Lasher.

Capable of taking up to fifty images per day, “The Vita Flex CR can start a clinic down the digital pathway away from film,” said Lasher, who also expects the system to make a meaningful impact in emerging international markets.