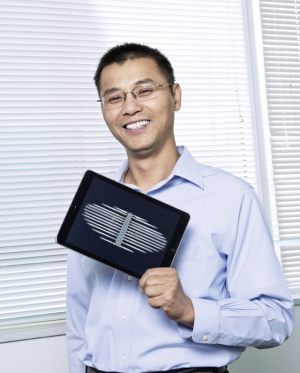 Dr. Kevin Zhou
On December 4th, Siemens named their twelve inventors of the year. Among them was Kevin Zhou, principal key expert for whole body image analytics at Siemens Corporate Technology US. Zhou was one of the principle developers of a new rib imaging system being incorporated into Siemens' syngo.CT Bone Reading software.

The system, which itself was a recipient of a 2014 R&D100 award, offers a promising glimpse into the direction of complete visualization that diagnostic medicine is heading in.

Developed by Zhou and his colleagues, the new technology automatically isolates a patient's rib cage and vertebrae in a CT scan consisting of voxels (3-D pixels), segments them from the rest of the image, and flattens them into one 2-D plane to facilitate reading and analysis. Conventional imaging of the ribs is sometimes a lengthy and error prone process.

Since introducing the technology into the syngo.CT Bone Reading software in 2013, independent clinical evaluation has indicated rib imaging times can be cut by 50 percent and fracture detection may also be improved.

DOTmed News spoke to Zhou about the system, which he said performs two essential functions. "First is the labeling of the voxels which belong to the rib," said Zhou, "then comes the creation of the flattened image."

The biggest hurdle to the technology was figuring out how to systematically recognize and label the rib voxels. "It took us quite some time to figure out an intelligent algorithm to accurately label them," said Zhou, "If the system sees a certain type of voxel with a certain surrounding, it then determines whether or not it's a rib."

The software is currently being used in 116 hospitals or imaging labs in 23 countries, and yielding cost savings of approximately $12 per use in terms of radiologist reading time. A press release from Siemens indicates that savings may add up into the millions over the next five years.

Zhou contributed three patents, (to a total of six) for the development of the syngo.CT Bone Reading software, and over ten years with Siemens has been granted a total of 31 patents, as well as credit for 213 inventions.

While Zhou can't speak on behalf of the long-term strategy for Siemens, he does believe this technology could open the door to similar imaging tools for other regions of the body. "A human body has over 200 bones," said Zhou, "reading 200 bones can be a tedious task, so having this unfolding view would be very useful."