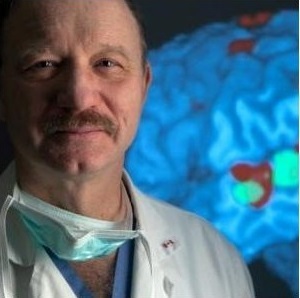 Dr. Rees Cosgrove
A proof-of-concept study being conducted by Dr. Jin Woo Chang at the Yonsei University Medical Center in Seoul, Korea, is yielding positive outcomes for treating obsessive-compulsive disorder (OCD) with focused ultrasound. Although only the first four patients, (out of twelve) have been reported, their condition six months after treatment has researchers feeling optimistic.

All four patients had small targets deep in their brain, (the anterior internal capsule) successfully ablated in the non-invasive procedure. In the ensuing months, a reduction in OCD thoughts and behavior were reported. After treatment, symptoms of anxiety and depression were almost immediately reduced; both of which frequently accompany the disorder.

Up this point, Dr. Chang's team has reported zero acute complications from the procedure and no change whatsoever in neuropsychological test results.

DOTmed News spoke to Dr. Rees Cosgrove, adjunct professor of neurosurgery at Brown University, about the implication of these findings. "This is the only study I'm aware of that is using focused ultrasound for OCD," said Cosgrove.

From the start, he emphasized the importance of understanding how severe a patient's OCD must be to even be qualified for a treatment of this nature. That selectivity, coupled with the need for a highly specialized team of experts, may be factors contributing to the slow pace at which data can accrue.

Many OCD patients can be treated medicinally, but this treatment pertains to the ones who require ablative solutions to control their symptoms. The current options available for those patients include radiofrequency ablation, deep brain stimulation, and stereotactic radiosurgery, all of which carry their risk of side effects or a degree of invasiveness.

Cosgrove expects outcomes from focused ultrasound to be comparable to stereotactic radiosurgery outcomes with Gamma Knife. "The advantage with focused ultrasound is that you can see the lesion on MR images while you're doing the treatment," said Cosgrove. Patients treated with Gamma Knife also experience the same fast drop in anxiety and depression.

While neurosurgery for OCD does not offer a cure, it does help control symptoms. "A procedure like this allows proven therapies to work more effectively," said Cosgrove, who sees focused ultrasound as a logical next step in providing better, less invasive outcomes to patients.

All twelve procedures were performed using the InSightec ExAblate Neuro MR-guided focused ultrasound system and, provided the remaining eight patients in this study yield similar positive outcomes, the treatment may ultimately become a viable non-surgical option for OCD and perhaps lead the way to treating other psychiatric disorders.

Focused ultrasound has already been used to treat Parkinson's disease as well as other movement disorders. Cosgrove anticipates future applications could be designed for the treatment of depression and pain management, as well.