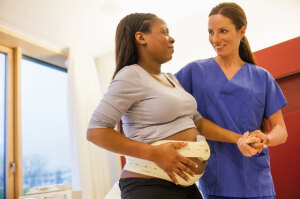 The Avalon CL from Philips
Monitoring a mother during childbirth can be vital to ensuring the health of both mother and baby, but most operate at the expense of the mother's own comfort. As a second generation cable-free monitor from Philips Healthcare, the Avalon CL Fetal Monitoring solution allows for more movement and freedom in the birthing experience — while retaining the customary benefits of cable-based monitoring.

In an age where medical tourism allows mothers-to-be to choose where they want to give birth, Werner Haas, General Manager of Philips Monitoring, told DOTmed News that what's good for mothers is good for the delivery room.

"Providing patients with a better experience will result in a higher likelihood of them returning for their second, third, and fourth baby," said Haas. Compared to a tethered monitoring system, "This system eliminates delays and the medications that are often associated with them during the labor and delivery phase, and allows a much smoother birthing process."

Unrestricted movement is not just more comfortable for the mother but is actually proven to be healthier, said Haas. With the new system, a mother can even take a shower or lay in a bath tub while being monitored just as precisely as if she were stuck in the delivery bed with a tethered system.

The Avalon CL is the first cable-free monitor to incorporate Philips' patented Smart Pulse technology, which allows the system to discern between the heart rates of mother and fetus, (as well as between twins and triplets).

Haas said that distinguishing one pulse from another is of critical concern in the second stage of labor, when there is a clinically significant threat of a fetus requiring urgent attention.

The Avalon CL received FDA 510(k) clearance the day before Thanksgiving, but Philips elected to withhold the news until their sales team had been properly trained and the busy holiday season had passed.