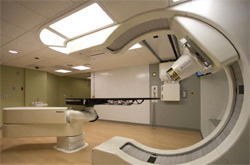 From the March 2015 issue of HealthCare Business News magazine

In April of 2013, 31 year-old Brad Eastman had a cancerous tumor surgically removed, and everything seemed fine for over a year. Then, a routine scan revealed a re-growth. After careful consideration of his options, Eastman and his physicians determined that he was a candidate for proton therapy.

Today, having undergone a full recovery, he describes himself as a “lucky and blessed man,” and credits his life to the treatment he received at the S. Lee Kling Proton Therapy Center at Barnes-Jewish Hospital in St. Louis, Missouri.

The ease of his 30 visits, each comprised of three unanesthetized twenty-minute sessions under the beam, left a lasting impression on Eastman. “I was amazed at how quick it happened, how effective it was, and how painless it was,” he told Healthcare Business News. “You feel nothing, you smell nothing.”

Eastman says it’s “totally different” from all the other medical imaging procedures he is familiar with, “You don’t change into a gown, they don’t check you for metal, you can leave your cell phone and your wallet in your pocket.” He elected to take his shoes off for the treatment because it would be more comfortable. Afterwards, he would lace them back up, drive himself home, and eat dinner with his family.

Demystifying protons
Although not a “new” concept, proton therapy is very much in its formative years. Medical professionals are familiar with outcomes like Eastman’s, but responsible medicine— and health reform — requires the hard numbers to illustrate what cases yield the greatest benefits and, in turn, justify the treatment. The growth of that data pool is hindered by the staggering costs typically associated with proton facilities.

At S. Lee Kling, they use a system specially designed to resolve those cost problems.

The MEVION S250, from Mevion Medical Systems, is among a new breed of “compact” proton systems that lends itself to installation in clinical facilities, not just research and academic institutions. Since December of 2013, that system has been shedding light on — and adding evidence to — meaningful proton utilization.

S. Lee Kling has already treated over 100 patients with over 6,700 proton treatment fields. On some days, more than 20 patients would take a turn being treated in the system. Of those patients, roughly 25 percent were children, and of the adults, 30 percent were being treated for brain tumors, like Eastman.

HCBN spoke to Dr. Jeffrey Bradley, director of S. Lee Kling, about what he and his colleagues have learned since opening the doors for proton therapy treatment.
1(current)
2
3