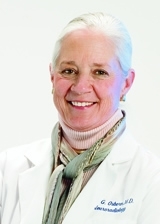 Dr. Anne Osborn
Being chosen to be an ECR 2015 keynote speaker is both a great honor and a great responsibility.

“I’ve got 25 minutes to make my presentation to 7,000 radiology and academic colleagues,” said Dr. Anne Osborn, the Nikola Tesla honorary lecturer at the European Society of Radiology Annual Congress, to commence Wednesday in Vienna, Austria. It’s not lost on Dr. Osborn, an award-winning author and neuroradiologist at University of Utah Health Care system, that the ECR Congress is the second largest medical meeting in the world, with nearly 25,000 in attendance in 2014. She has been attending nearly every other year since the early 1990s and has given several well-received presentations at past ECR annual conferences.

Dr. Osborn’s presentation will give an update on the World Health Organization classification and grading of brain tumors and its correlation with imaging, now known as radiogenomics.

“Until relatively recently neuropathologists used microscopic examination of biopsy specimens to diagnose and grade brain tumors. Now it is possible to identify genetic signatures of brain tumors, she explained.

“We have always known some tumors that look the same under the microscope behave very differently in the patient. For example, take a low-grade glioma...a WHO grade 2 astrocytoma. Some patients do well while others with the same tumor do poorly, and their tumor is like a grade 4. We now know the molecular signatures are different, even though they look the same under the microscope," she noted.

She also cited medulloblastoma as another example.

“This brain tumor is not a single diagnosis, but four distinct tumors that look similar under the microscope. All are considered grade 4 – the worst. The molecular signatures identify one form of medulloblastoma that is not nearly as serious. Patients with this particular type have a prognosis that is very good with little or no therapy. So if you’re talking to a young mother of a child with this type of tumor, it may mean [the child] might be spared chemo- and radiation therapy.”

Reached at the Salt Lake Airport just before boarding her direct flight to Paris, she told DOTmed news that the field is evolving so rapidly that she checked on the Internet before departing for the airport to find out what new research was reported over the weekend. She was quick to point out that her work relies on the work of many other colleagues. Her Tesla keynote presentation, for example, will be preceded by a focus session a few days earlier by Marion Smits from the University Medical Center in Rotterdam, also on radiogenomics.

Asked if these molecular signatures have applications for other brain disorders, Dr. Osborne said it was a good question.

“I focus on the brain. But we know now that a lot of behavioral disorders also have genetic markers.”