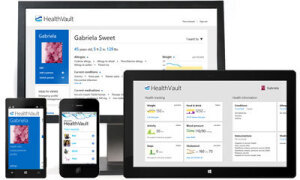 healthvault
From the April 2015 issue of HealthCare Business News magazine

In 1969, a computer responsible for what likely ranks in many people’s minds as one of the greatest feats in the history of mankind helped three men to complete a mission that left people around the world awestruck. Of course the event was the moon landing and the men, Michael Collins, Buzz Aldrin and Neil Armstrong used a computer guidance system that had 64 Kbyte of memory, operated at 0.043MHz and a fancy display that was entirely numeric. At 70 pounds and about two feet by a foot and over six inches thick, there was little worry that they’d leave the system in a restaurant by accident, or forget to take it out of a pocket before sitting down.

Today, the processor speed for the iPhone 6 is a 1.4 GHz A8 dual core processor with 1 Gb of RAM, but these specifications don’t really do justice to the difference between the Apollo-era computers and today’s in terms of power or capability. And the iPhone would slip neatly into the breast pocket of a spacesuit.

Patient care and tracking
With a positive patient experience being more important than ever, it pays to pay attention to some consumer-centric apps that may help deliver on a happy patient promise. Here are a few that may make that a reality:

Microsoft Health Vault
Produced by: Microsoft Corporation
Price: Free
Version: 2.2.1
Last Updated: Oct. 24, 2014
Works on: 251 devices
While largely targeted at consumers, MHV is actually quite useful for medical professionals as well since it helps patients file and organize pertinent information about their health. It provides a place to track and store information on medications, lab results, X-rays and more. Having this information at hand can save time, prevent redundant tests and imaging procedures and ultimately lead to a better patient experience.

PingMD
Produced by: PINGMD, INC.
Price: Free
Version: 2.2.1
Last Updated: Nov. 10, 2014
Works on: iPhone, iPad, and iPod touch, Android
PingMD, unlike MHV, is marketed to health care professionals, but with the intention of having those professionals use the app to connect with patients in order to track symptom progression, post-procedure follow-up, disease management or to answer follow-up questions.

Reference
If you have a hobby like building ships-in-a-bottle or collecting signed baseballs, the bookshelves in your office may be open for display if you go with some reference apps. With the glut of information available with just a few swipes of the finger over your smart-phone, the volumes of reference materials taking up shelf space should be a thing of the past. Here are some to check out:
1(current)
2
3