Is dementia screening a good fit for telehealth? Most older adults think so 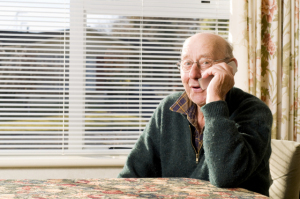 Using the telephone as a first line of defense in screening patients for dementia could yield serious cost-saving benefits. A new study out of the Indiana University Center for Aging Research and the Regenstrief Institute, found that 63 percent of seniors surveyed are comfortable with such a screening process.

There were two significant predictors in determining if a participant in the survey would be willing to be screened remotely. The first was belief in the benefits of catching cognitive decline at an early stage, and the second was having a friend or relative with Alzheimer's disease.

The research itself was executed through a telephone survey, and found willingness percentages to be consistent across variables like gender, race, and age. Notably, a previous survey conducted by the same researchers determined 90 percent willingness from patients queried on the subject face-to-face.

"Despite rising incidence rates of Alzheimer's and other dementias, many individuals with cognitive impairment are not screened. They go unrecognized and thus never receive evaluation or diagnosis," said IU Center for Aging Research and Regenstrief Institute investigator, Dr. Nicole Fowler, in a statement.

"Understanding patients' attitude about the risk and benefits of early identification of dementia is vital as we evaluate potential screening barriers and facilitators," continued Fowler, who led both the current study and the one conducted face-to-face.

In addition to keeping the physician's office free for other patients, telephone screening would present a smaller burden on the patient. Of the 400 elderly people surveyed, none of them had a dementia diagnosis and only two percent reported having suspected memory problems.