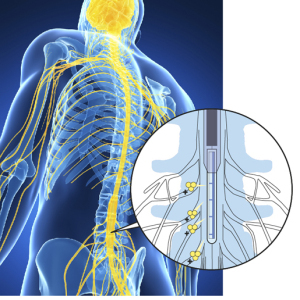 Courtesy of Linköping University
Researchers at Linköping University and Karolinska Institutet in Sweden have developed a small ion pump that sends out the body’s own pain relievers to treat patients with severe nerve pain. The pump is the result of 10 years of research.

The pump works similarly to a pacemaker. Pacemakers send electrical impulses to the patient’s heart but the pump sends neurotransmitters, which are the body’s own pain relievers, to the area where the damaged nerves meet the spinal cord.

Seven percent of the world’s population suffers from incurable nerve pain, but this pump may be the treatment they need. The pump can also be used to deliver therapeutic substances to the brain and other areas of the body, other than the spinal cord.

To develop the pump, the researchers used what’s called organic electronics; a class of materials that can easily translate from electronic and biochemical signals. An electric current is sent through the pump and then GABA is spread out like a thin cloud over the targeted areas on the spinal cord.

“What’s unique is that we’re using organic electronics to send the body’s own chemical signals. The organic materials are easily accepted by the body, and they communicate just as in biology — with charged ions,” Daniel Simon, assistant professor at Linköping University, said in a statement.

The researchers have tested the pump on animal models at Karolinska Institutet and found that it's associated with no negative effects. The results of the research have been published in Science Advances, which is a new sister publication of the journal Science.