Reflections on the ACR meeting 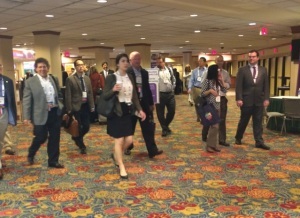 Walking the floor
at ACR 2015
The first general meeting of the ACR got underway this week in Washington, D.C., and DOTmed was there to see how it would turn out. I'll save you any suspense by saying upfront that we were very impressed.

Walking through the conference — visiting with old friends and making a few new ones — I couldn't get over the diversity of the exhibitors and the broad range of services they were offering.

Our journalist Lauren Dubinsky attended six of the educational sessions and she will be reporting on them in the next few weeks.

She and I caught up briefly, and she told me the role of imaging in an era of personalized medicine was a hot topic among the presenters, so expect to read more about that in our Online News.

Overall, the ACR meeting struck me as a very focused event, and I overheard a number of spirited conversations between radiologists. It was a valuable reminder to me that radiologists are a big group and they cover a vast number of modalities.

So congratulations to the ACR on a job well done! DOTmed will be marking our calendars to make sure we get back next year.