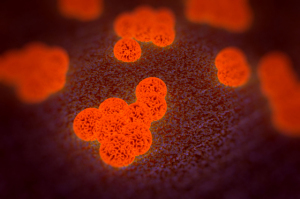 MRSA "superbug"
bacteria
A report issued by the UK's Review on Antimicrobial Resistance outlined the global demand for more resistant antibiotics and the consequences at stake if meaningful action is not taken.

The committee, appointed by the British government, warned that drug-resistant microbes could kill 10 million people a year worldwide by 2050, and called for $2 billion over five years to be put into developing new antibiotics.

The author of the review, Jim O'Neill, estimated the economic damage from antimicrobial resistance could cost $100 trillion globally.

Antibiotic resistance adds a new level of danger to traditionally low risk surgeries, but creating revenue for universities and small biotech companies doing research and development could help curb that problem while ushering in a new era for antibiotics.

The report posits that one direction for development could be "resistance breakers" that could boost the effectiveness of already-existing antibiotics without the cost burden associated with the development of entirely new ones.