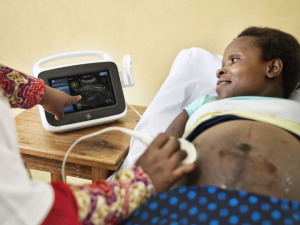 GE's Vscan Access
Approximately 800 women die every day from preventable complications associated with pregnancy and childbirth — and virtually all of those deaths (99 percent) occur in developing countries.

Those figures, which come from the World Health Organization, point to a problem that portable ultrasound may be able to help solve. GE Healthcare launched the Vscan Access, at the World Health Assembly in Switzerland last week, with those statistics in mind.

“Improving maternal and newborn health and reducing pregnancy-related mortality remains one of the most pressing priorities in the developing world,” Ajay Parkhe, general manager of primary care ultrasound for GE, told DOTmed News. “The goal is to improve both access to health care and early detection and referral of pregnancy complications for patients in developing regions.”

GE designed the device specifically for midwives, general practitioners, paramedics and clinical officers in developing regions in Africa and Southeast Asia. Primary care facilities in those areas are often underutilized and don’t have the proper resources and capabilities for front line care.

Unlike traditional ultrasound devices, GE designed the Vscan Access with the knowledge that midwives and primary care physicians need a device that is very easy to learn and fast to operate.

Traditional ultrasounds have dozens of features and functions but Vscan Access has only six primary scanning functions. It also has an intuitive touch-screen interface that uses the gestures and controls found on any tablet or smartphone.

It has Bluetooth wireless connectivity, which allows images and reports to be transferred from the device to any smartphone so a physician in a different location can provide a second opinion or guidance. It also features Scan Coach, which provides the user with reference images and scan planes at any time.

It can be used in a variety of settings including an emergency room, a mobile clinic, the patient’s bedside or the patient’s home. In order for the device to withstand those conditions, GE had it undergo drop testing and designed it to be resistant to extreme dust and without moving mechanical parts that can easily break.

Over the past few years, GE has partnered with governments, academic researchers and non-governmental organizations to investigate the impact that ultrasound has on maternal health in primary care facilities.

A study led by the Ifakara Health Institute in Tanzania had 14 midwives, nurses and medical attendants undergo training for 10 days in the use of a handheld ultrasound and found that user accuracy was higher than 80 percent. That suggests that task-shifting ultrasound may be an effective approach to widening access to prenatal diagnostic imaging.

In 2010, GE made a commitment to the United Nations to create evidence-based solutions for maternal and child health by 2015 and Vscan Access is the latest contribution to that. It does not have FDA approval and is only commercial available in certain parts of Africa and Southeast Asia.