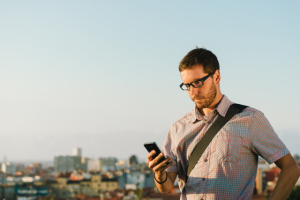 A dual truth about bystander cardiac arrest emergency assistance has been discovered by a team of Swedish researchers. First, cardiopulmonary resuscitation (CPR) administered before an ambulance arrives doubles 30-day survival rates. And second, when would-be CPR trained rescuers are alerted to a nearby victim through a smartphone text, the victim is 30 percent more likely to receive bystander CPR.

“Out-of-hospital cardiac arrest is a major health problem,” Dr. Jacob Hollenberg, head of research, Centre of Resuscitation Science at the Karolinska Institute in Stockholm told DOTmed News. “We needed to find ways of increasing rates of bystander CPR in order to really affect survival.” According to Swedish statistics the death rate from cardiac arrest is about 90 percent, the same as in the U.S.

To achieve this end, Hollenberg and his study colleagues evaluated a new system that dispatched 10,000 trained CPR volunteers in Stockholm County who were alerted by mobile phone text message if they were within about a quarter mile nearby to the victim. It is a system that, with some modification, can work in the U.S., Dr. Comilla Sasson, Ph.D. a University of Colorado School of Medicine ER doctor and professor and director of community markets and programs for the American Heart Association (AHA), told DOTmed News.

“The two Swedish studies do a great job reaffirming what we know about the first few minutes of cardiac arrest. Some 62 percent of patients in the Swedish study treated via mobile phone intervention received CPR, while the patients treated via bystander CPR in the U.S. without the mobile phone alert received CPR in only 48 percent of cases,” Dr. Sasson explained. She wrote the accompanying editorial for the NEJM article about the Swedish study. She has published more than 50 clinical papers about CPR or cardiac arrest.

Dr. Sasson said that additional research is needed in the U.S. to implement the same smartphone CPR alert system, but she believes it has potential. Some of the barriers she cited include ensuring that laws protect smartphone CPR rescuers from litigation. She also said finding a way to make a Swedish style 911 system, which is highly centralized in a much smaller country, work as well in a highly fragmented U.S. 911 system.

“We also need to get more people trained in CPR, even if it’s just to teach people that doing chest compressions alone for the five minutes before an ambulance arrives can make a difference,” she added. “About 80 percent of cardiac arrest occurs in the home. So learning CPR can save a family member.” She recommended that everyone at the very minimum view the following hands only CPR demonstration video.

The study was published this month in the New England Journal of Medicine.