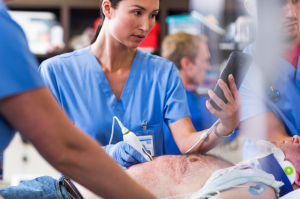 Woman using Lumify
Courtesy: Philips
Add ultrasound imaging to the list of things you can now do directly from your phone. With Lumify, Royal Philips has raised the bar on portable ultrasound by creating a new frontier: app-based imaging.

That means the only hardware required is a commercial tablet or smartphone – Android only, for now – and a transducer that plugs into the device's charge port.

“You simply access ultrasound like you would any other app on a tablet,” Randy Hamlin, VP Business Segment Leader Ultra Mobile at Philips, told HCB News. He said the lack of a dedicated ultrasound device allows the program to be upgraded more freely so improvements in tablet technology can be utilized without capital purchases.

The lack of hardware also meant Philips had to come up with a unique revenue model for Lumify. The ultrasound service is provided through a monthly subscription. According to Hamlin, there are no upfront fees or penalties for leaving, and service can include insurance for the transducer.

“Our intent in doing that is to enable easier access to ultrasound by removing the barrier of capital purchases and instead using 'easy-in' 'easy-out' terms,” said Hamlin, adding that the monthly charges will not be impacted by usage rates.

Philips will target Lumify toward critical care, emergency room, sports medicine, podiatry, and bedside ultrasound practitioners. The app may also have a big impact on rural areas and developing countries where access to care is limited.

Hamlin described the cloud-enabled technology as “highly connected” (as one might reasonably expect from a smartphone based system) and said it can interface easily with hospital PACS and other archiving systems. Lumify communicates with a web portal where transducer usage can be monitored, subscriptions can be managed, and educational training materials are available for registered users.

For now, Lumify exists on a single app with both grey scale and color imaging capabilities, and can do all the standard things one might expect from traditional ultrasound systems. In time however, Philips hopes to expand the solution to include additional apps targeted for specific ultrasound specialties — so a practitioner might one day have an entire library of ultrasound apps customized for different imaging procedures.

“Our intent is to keep adding apps targeting specific clinical use cases,” said Hamlin, who gave the example of a bedside bladder measurement as an area where specialized applications could serve physicians performing a high volume of a particular procedure.

Philips' Ultrasound Consortium of health care leaders, a growing think tank of distinguished clinicians that was announced at RSNA in November, will play a role in determining ways to add value to the system. The group counts physicians from the University of Washington, Mount Sinai and Brigham and Women's Hospital among its members and is expected to meet twice annually to discuss possible developments.

Lumify is capable of DICOM compliance and is FDA approved, but it won't arrive on the market until later in the year. Philips will be unveiling the system at the Social Media and Critical Care (SMCC) conference currently underway in Chicago.