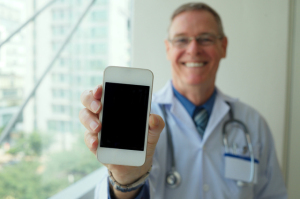 Frank Lindseth, a scientist at SINTEF, an independent research organization based in Trondheim, Norway, developed a beta version of the app with the help of computer science students at the Norwegian University of Science and Technology.

“The threshold for the use of ultrasound is steadily being lowered, and more and more people need to learn to interpret what they see on the images,” said Lindseth, in a press release from SINTEF announcing the app. “For this reason, it is important to expose them to a wide range of ultrasound images.”

Ultrasound is now commonly used for procedures such as needle biopsies and in guiding local anesthetic injections before surgery. The app works like a video game, training players to identify a leg nerve, as well as surrounding landmarks, in ultrasound images. The goal of the game is to place a needle close to the nerve and inject anesthetic around it so that the “leg” can be operated on. The game increases in difficulty over three levels.

In the press release, anesthetist Kaj Johansen, who supplied data for the project, called the app “useful and instructive.”

“One major advantage of ultrasound is that it makes a number of examinations and operations simpler and less time-consuming, as well as being easier on the patient,” Johansen said. “For example, in many cases, ultrasound can mean that we don’t need to put the patient under general anesthesia.”

The development team is planning to add more data to the app that will cover more of the anatomical variability seen in patients. Once the data is added, the app will be available an iOS and Android.

“It is important that it should be used a lot, because the only way to become good at interpreting ultrasonic images is to completely internalize the process,” Lindseth said. “The idea is that you should be able to bring it out in the bus, in a waiting room or at home on the sofa.”

In the U.S., there has been a shift in recent years, from sonographers conducting scans that are read by radiologists to emergency room and critical care physicians using ultrasound at a patient’s bedside.

“If you want to be really an expert ultrasound imager for the whole body, from head to toe, that’s a multi-year credentialing process,” Hamlin told DOTmed News. “If I’m a nurse and I want to make sure that I place a line or a catheter in the vessel of the patient appropriately, that requires a different approach to training.”

Hamlin said Lumify, which uses a transducer that plugs into a commercial tablet, includes its own training tools.

“It’s an exciting challenge, but I think there’s a lot of energy around bringing us farther and farther out. I think this is the beginning of an exciting transition.”