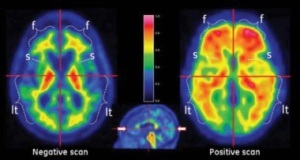 Vizamyl
Courtesy of GE Healthcare
A new study presented this week at the Alzheimer’s Association International Conference revealed that GE Healthcare's Vizamyl PET amyloid imaging improved diagnostic confidence and altered care management plans for over a third of the patients with early-onset dementia.

“Thanks to the encouraging data from this study, there is growing evidence that Vizamyl can impact diagnoses and subsequent treatment decisions beyond the standard clinical workup," Ben Newton, director of neurology at GE, told HCB News. "Vizamyl could be an important resource for physicians to add to their existing workup processes when assessing early onset dementia patients.”

Vizamyl is one of three FDA approved [18F]-flutemetamol tracers, (the other two being Eli Lilly's Amyvid and Piramal Imaging's Neuraceq). It is a radiopharmaceutical used for PET imaging of beta amyloid neuritic plaque density in adults being evaluated for Alzheimer’s disease and other causes of cognitive decline.

They found that 133 or 63 percent of the patients had positive PET scans. After physicians were informed of the PET results, 19 percent of the diagnoses were changed and overall diagnostic confidence increased from 12 to 15 percent.

In April, the Alzheimer's Association and ACR announced a four-year research study called The Imaging Dementia – Evidence for Amyloid Scanning (IDEAS) Study. GE is working with them to gather data, which they hope will lead to more standardized adoption of PET imaging for Alzheimer's.