Button up your overcoat! 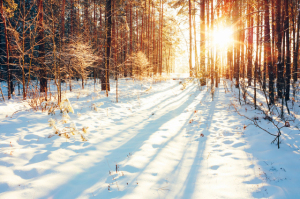 We're so lucky to live in this day and age. If you have any doubt about that statement then let me share something wonderful with you.

The European Society of Cardiology just had its annual meeting in London. I was unable to attend but I've been following some of the remarkable research being presented.

By accumulating scientific evidence about the health and function of the heart, experts are showing us lay people how to live longer, healthier lives.

In some of the findings there was a trend I noticed, and it doesn't take a medical expert to see it.

A study out of Taiwan showed that stroke risk among patients with atrial fibrillation is increased in winter — when colder weather disrupts the steady flow of blood in the body.

Another study came to my attention in which researchers determined a factor that increases risk of heart attack. Do you know what it was? Cold weather.

Those scientists were from the University of Manitoba in Winnipeg, so they had ample access to frigid temperatures on which to test their hypothesis.

For me there is a simple take away from these findings. It isn't very clinical — in fact it's something parents have been telling their children for centuries — when it's cold outside: bundle up!

You may think summer is an odd time to consider the dangers of cold weather, but these researchers and I would disagree.

We've all seen people caught in the wrong outfit when winter first hits. Now it's up to each of us to make sure we have proper boots and a coat when the cold weather strikes.

It always arrives quicker than we expect.