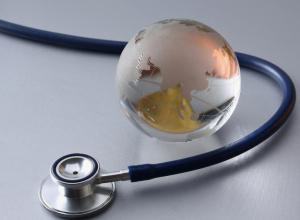 During the conflict between Israel and Palestinian militants in 2012, a young doctor from London, Ontario, found himself dealing with a flood of wounded in the ER at Shifa, Gaza City's main hospital — and was frustrated that staff had to make do with just two stethoscopes.

A lack of critical medical equipment and supplies is nothing new in embattled and medically underserved places around the globe. For Dr. Tarek Loubani, however, his frustrations led to an "ah-ha" moment and a harbinger of a new approach to solving this and similar challenges. After several years of development and testing, he has produced a reliable, accurate — and cheap — 3-D printed stethoscope, which can be produced on the spot using basic supplies and a printer.

"I had to hold my ear to the chests of victims because there were no good stethoscopes, and that was a tragedy, a travesty, and unacceptable," Loubani told the Chaos Communications Camp in Zehdenick, Germany, according to The Register.

His insight came to him when he was playing with a nephew's toy stethoscope in Canada after the conflict. Its performance surprised him, he told The Register. Loubani suddenly saw that stainless steel wasn't needed to make a real stethoscope ear tube.

He succeeded in creating a plastic prototype, unveiled in August. The details for creation and testing are online at the Glia project website.

The use of a 3-D printer permitted the Palestinian-Canadian doctor to make his listening device for just $2.50 — and it has received rave reviews from professionals.

"The Glia model stethoscope is indeed a high quality instrument," said Dr. Jonathan Dreyer, research director of emergency medicine at the Schulich School of Medicine and Dentistry at the University of Western Ontario, who is not a member of the Glia Project.

"I have used it on many of my patients in the emergency department and can attest to the fidelity of the sound," he said. Dreyer noted that it was, in fact, "as good or better" than the popular Littmann, Cardiology III and his feeling was confirmed by audio tests published online that showed the printed stethoscope was on par with the market leader.

Loubani told the AP that he hoped to "produce these devices locally so they meet local need and so that they are not dependent of the political winds of the Israelis and of the donor community."

In an effort to make other locally manufactured medical devices available in Gaza and other areas where supply is scarce, the Glia Project has also created designs for 3-D printed medical tools like needle drivers, used to hold suturing needles, and pulse oximeters, which measure blood oxygen levels.

The printed stethoscope is a boon in Gaza. "This is simple, cheap and it's enough for us here," said Dr. Ayman Sahbani, head of the emergency department at Shifa. "Now we can make a stethoscope available for each doctor."

"I'm very happy that patients in Gaza and patients all around the world can now, with these stethoscopes, receive the best care possible," Loubani said.