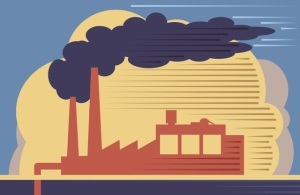 Researchers have new evidence that even a minuscule increase in pollution particles can increase a population's overall death rate by 3 percent. For heart disease, the death rate goes up 10 percent, and among non-smokers the incidence of respiratory disease death jumped up 27 percent.

Thurston and his team based their conclusion on data from a detailed health and diet survey conducted by the National Institutes of Health (NIH) and the American Association of Retired Persons (AARP), which involved 566,000 male and female senior citizen volunteers across eight states.

“Our data adds to a growing body of evidence that particulate matter is really harmful to health, increasing overall mortality, mostly deaths from cardiovascular disease, as well as deaths from respiratory disease in nonsmokers," said Thurston. He explained that because the baseline for nonsmokers from all causes was lower, air pollution is a bigger risk for nonsmokers.

The study was published online this week in the journal Environmental Health Perspectives. Thurston said the pollution particulates are so small — not visible to the eye — as to bypass the body’s normal defenses and are absorbed deep into the lungs and then into the blood stream. These particulates include such dangerous chemicals as arsenic, selenium and mercury, as well as gaseous pollutants such as sulfur and nitrogen oxides.

The increased death rates are an equal opportunity killer. The investigators cross-referenced the data and statistically ruled out other variables impacting health and longevity, such as socio-economic factors. For example, no difference in death rates and particulate exposure were noted between sexes, across age groups or education. Even limiting the study to only the state of California, which has strict air pollution control standards, did not make a difference in death rates.

“This finding has influence on other issues, such as climate change mitigation policies,” said Thurston. “It says if we control CO2 emissions to reduce climate change, and particle emissions are reduced at the same time, there will be immediate and local air pollution health benefits.”