What was old is new again 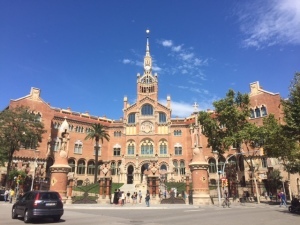 The hospital has a rich history going back to the early 15th century when six small medieval hospitals came together as one.

The Old Hospital de la Santa Creu is still standing near the center of Barcelona, but today it houses an art school and two public libraries.

In the early 20th century it relocated to its current location. That was when i Sant Pau was added to the end — a tribute to a banker named Pau Gil who funded the relocation.

The "new" hospital was built with parks surrounding it in the belief that fresh air and a pleasant atmosphere would help patients in their recovery.

The hospital closed in 2009, but it seems to me that this philosophy to embrace natural settings is making a comeback.

Prouty Garden at Children’s Hospital in Boston has adopted this attitude in their design and I have seen this at Shands Hospital as well.

It is interesting how that idea fell out of favor but now what was old is new again.

When you think about it it makes good sense.

My next stop is Greece, I hope to report more when I get there.