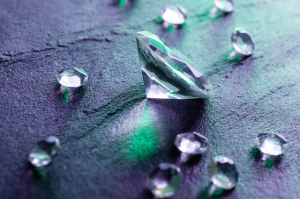 Diamonds are forever, and one day soon they may give those facing cancer, if not immortality, a longer — even cancer-free — life, too.

Physicists at the University of Sydney's ARC Centre of Excellence for Engineered Quantum Systems have found a method to use nanodiamonds to better find early-stage tumors, according to a university statement. The research just appeared in the journal Nature Communications.

"We knew nanodiamonds were of interest for delivering drugs during chemotherapy because they are largely non-toxic and non-reactive," said team leader Professor David Reilly.

His team of physicists tackled the tough problem of utilizing these tiny diamonds to "light up" cancerous tumors before they could grow to be a threat to life.

"We thought we could build on these nontoxic properties realizing that diamonds have magnetic characteristics enabling them to act as beacons in MRIs. We effectively turned a pharmaceutical problem into a physics problem," he said.

Reilly and his colleagues focused on figuring out how to "hyperpolarize" the tiny synthetic gems — that is, how to align the atoms inside a diamond to make a signal detectable by an MRI scanner.

"By attaching hyperpolarized diamonds to molecules targeting cancers, the technique can allow tracking of the molecules' movement in the body," says Ewa Rej, the paper's lead author.

Researchers hope someday to be able to use their method to target especially hard-to-spot cancers in their earliest stages so that they might be treated before they become a threat to life.

"Brain and pancreatic cancers are two of the most deadly cancers, so anything which potentially detects these cancers earlier is obviously very welcome news," Cancer Australia chief executive Helen Zorbas told the Australian Broadcasting Co.

Although real diamonds are expensive, not so the synthetic ones used by the researchers. "They're very cheap and readily available," Reilly said, adding, "that's great news because we wouldn't want to build some medical treatment around a technology that you had to dig up out of the earth."

The team will next focus on testing the new technology on mice, and if that works well, move ahead to clinical trials.

"This is a great example of how quantum physics research tackles real-world problems, in this case opening the way for us to image and target cancers long before they become life-threatening," said Reilly.