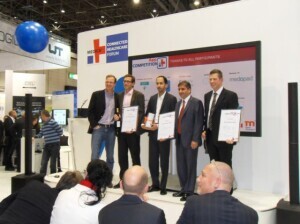 Last year's competition
Historically speaking, the phrase "phoning it in" has implied giving less than your best effort — but in an era of health reform, smart phones are among the devices with the greatest potential to fundamentally revolutionize care.

Next month in Dusseldorf, MEDICA, the largest health care trade show on the planet, will announce the winner of its fourth health app competition. It's an event that has developed a particularly fervent following among the 130,000 show attendees.

Specifically, the judges are looking for the best app for daily use by a doctor or hospital. Last year's winner was Medopad, an app that allows doctors to access the entirety of a patient's data through a mobile device. In 2013, the company launched the first wearable health record on Google Glass.

MEDICA has just unveiled the ten finalists for this year's competition. Here they are, with descriptions taken from the developers websites and other details from MEDICA.

BrainControl is an Assistive Technology that utilizes a brain-computer interface (BCI) to interpret the electrical signals corresponding with certain brain activity. It enables computers or other external devices to be controlled with thoughts. The developers believe the app could be particularly useful for people suffering from pathologies like amyotrophic lateral sclerosis (ALS), multiple sclerosis, and traumatic or ischemic injury.

CardioSecur is a mobile ECG device of clinical-grade quality for smartphones and tablets. It is the only technology that has been developed to clarify heart symptoms where and when they occur, to make a cardiac diagnosis, and to prevent serious cardiac events. The clinical properties and ease of use of CardioSecur make it suitable for both  patients and physicians, but the PRO edition will be the one competing at MEDICA.

The PRO app can be used with many patients and shows a 22-lead ECG, with the option of an automatic diagnosis. The ACTIVE version, (for patients) saves the ECG’s in a secure database, which can be seen by the physician at any time and place. The PRO app allows for 10,000 minutes of ECG recording per 1GB.

Doctome is a telemedicine service that allows people around the globe to consult a caregiver in their own language by video and chat, anytime, anywhere, 24/7, 365 days a year, at the moment of need. The platform combines a customer relationship management (CRM) with an integrated electronic health record (EHR) system that generates documents such as clinical summaries, referrals to the emergency room, digitally signed prescriptions, and illness approvals. Those are sent secured to the patient at the end of the consultation, and everything is recorded for quality assurance and medical evaluation.
1(current)
2
3