Using MR on the brain to explain 'the blame game' 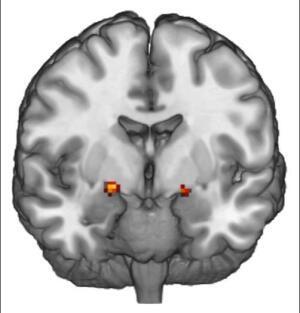 As shown in this functional
MR image, the amygdala, a
part of the brain involved in
processing emotions, is more
active in people who are blaming
others for their negative actions.
Credit: Lawrence Ngo
Why are most people quick to decide that a bad action is intentional, but are slow to give credit for a good action? Blame the brain — or, more accurately, the amygdala.

Researchers at Duke University examined this philosophical question using brain scans, presenting their findings in a study published last week in the journal Scientific Reports. They gave 283 study participants 15 pairs of vignettes and asked what they thought about the subjects’ intentions. While the researchers read the scenarios, they analyzed the study participants’ brain activity using functional MRI.

“It makes intuitive sense — when you see someone take a bad action, you often think they’re doing it on purpose,” Scott Huettel, corresponding author, professor of psychology and neuroscience, and Duke Institute for Brain Sciences member, told HCB News. “The data and intuition go together. We wanted to understand why.”

The vignettes included this one, commonly used in the field of experimental philosophy:

“We have a nice connection between people’s reports of their emotional state and activity in the brain,” Huettel said.

Huettel said that while he is not a legal scholar, he believes the research could be relevant in legal settings, as people convicted of crimes are generally given stiffer sentences for actions deemed intentional rather than accidental.

“I think the legal system will have to identify a way of separating the judgments of intentionality and judgments of consequences,” Huettel said. “That may not be simple. I think in the long term, that may cause procedural changes.”