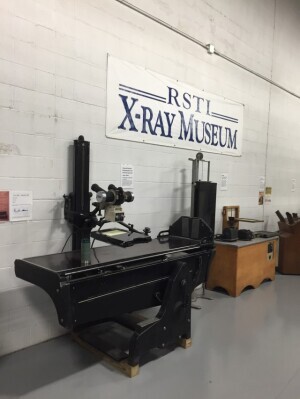 RSTI X-ray Musem
Last week at RSNA I met Dale Cover, the new president of the Radiological Service Training Institute (RSTI). When I told him I planned to make a business trip to Cleveland, he invited me to stop by and visit the facility. It was an invitation I gladly accepted.

I have seen a lot of transitions in my time — some smooth and some not — but things at RSTI seem to be running on all eight cylinders.

Dale made some cosmetic changes with new paint and furniture but it seems in most other ways things have remained the same.

The training team seemed upbeat and engaged and so did the students.

I also had a chance to tour the RSTI X-ray Museum... which was really great but had the unfortunate side-effect of making me feel old.

Dale has a quiet confidence about him and without the bravado that you see in some new presidents. You can tell he gets along with the trainers — but that may be because he worked for RSTI for over 26 years.

He told me that RSTI will continue to do what they do best and train students in how to maintain imaging gear.

Dale shared a lot with me during the four hours we spent together. The main thing I took away from our talks was that an engineer can teach a fellow engineer what he knows — but an instructor can teach an engineer everything he needs to know.