My lunch with Jim Spearman 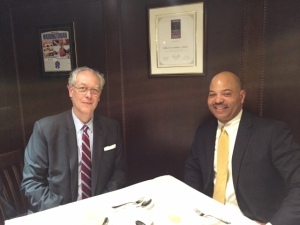 Phil and Jim
Yesterday, Jim Spearman, the President/CEO of Consensys, was in New York on a business trip and he joined me for lunch.

I had such an interesting visit with him.

We discussed politics and I learned a little bit about Consensys Imaging.

I also learned about Jim. I did not know this but Jim grew up in Pittsburgh, Pennsylvania and attended Carnegie Mellon University.

Jim had a few sales positions and eventually joined General Electric where he worked for 11 years. Over a ten year period, he was a police officer in Chicago and Denver. At the time, GE encouraged its employees to become involved in community activities and Jim picked the police department.

Four years ago, Jim joined Consensys Imaging, as the Vice President of Service.

Of course, we talked a little bit about business and Jim explained to me that he feels his job is to help the company grow and provide OEM level service to its customers.

I could not help but be impressed at how well read and well informed he is. I am sure that under Jim's leadership Consensys will continue to grow and prosper.