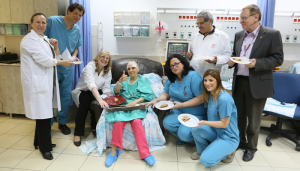 The patient and medical team
celebrating with cake
Courtesy of INSIGHTEC
The first, live broadcast of an MR-guided focused ultrasound procedure (MRgFUS) using INSIGHTEC’s Exablate Neuro system was broadcast at the 16th International Symposium on Therapeutic Ultrasound 2016 (ISTU) in Tel Aviv, Israel. It was performed in the MR room at the Rambam Medical Center in Haifa.

More than 200 scientists, engineers, clinicians and industry leaders attended the symposium this year. In addition to watching the broadcast of the procedure, they also shared new research findings in order to exchange ideas and foster collaboration.

“Many of them haven’t had the opportunity to witness an actual brain procedure, and it was very emotional and encouraging for them to see the technology in action,” Jean Francois Aubry, president of the International Society for Therapeutic Ultrasound, said in a statement.

The patient who underwent the procedure was a 65-year-old baker who suffered from essential tremor for over 10 years. She tried every medication to try to treat the condition and did not want deep brain stimulation or electrodes placed on her brain, which made her an ideal candidate for MRgFUS.

The Exablate Neuro system was used to focus multiple beams of acoustic energy to ablate target cells in the patient’s thalamus. The physicians were able to view the target cells in real time with the help of MR imaging.

After the three hour procedure, the patient immediately saw results and was no longer experiencing tremors. She was able to walk from the MR room, sit down and cut a cake to celebrate the success of the procedure with the clinicians.

“I wanted to cry, because I could not remember when I was able to drink a glass of water, and for the first time in over ten years, I can finally return to serving people in my bakery,” she said in a statement.

One of the neurologists, Ilana Schlesinger, treated her first patient with MRgFUS two years ago and she is still without tremor.

Essential tremor is a chronic and often progressive condition that usually affects the arms and hands on both sides of the body and an estimated 10 million people in the U.S. suffer from it, according to the International Essential Tremor Foundation (IETF).

The University of Maryland Medical Center is one of eight sites that is participating in an international clinical trial to treat the condition with MRgFUS. The initial results of the trial were promising – all of the patients showed immediate improvement in their tremor.

One of the physicians involved in that study predicts that the FDA will approve MRgFUS as a standard secondary essential tremor therapy on one side of the brain soon. If the results are still promising in the long-term, maybe it will be approved for both sides of the brain.