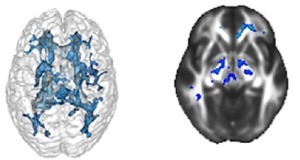 Several top health research organizations find in joint effort that “arterial stiffness” begins in mid-life and can be spotted on imaging and other studies.

The study, which involved 1,900 participants who underwent MR and arterial tonometry, found signs of systolic hypertension that causes brain injury. This was associated with reduced white brain matter volume and decreased integrity of gray matter, linked with stiffening of the arteries in patients as young as the mid-40s.

“Our data suggests that arterial stiffness may actually be a better measure of vascular health, and should be identified, treated and monitored throughout the life span,” Pauline Maillard, Ph.D., assistant professional researcher at UC Davis Medical Center, and lead author told HCB News.

Their research results were just published online in Stroke by the American Heart Association.

According to Maillard, the biological mechanisms triggered by increased arterial stiffness resulting in white matter injury remain not well understood, nor is the potential benefit to brain integrity of the early-life treatment of hypertension. This, she said, suggests further investigation, but she stressed there are important implications from the research findings.

“Our results emphasize the need for primary and secondary prevention of vascular stiffness and remodeling as early as the fifth decade as a way to protect brain health,” she said.

She noted that the reasons that arterial stiffening contributes to diseases such as Alzheimer’s are complex, but apparently cascading. In general, high blood pressure causes the arteries to lose elasticity – or stiffen – which makes the blood pressure worse. This, in turn, increases calcium and collagen deposits, which promotes atrophy, inflammation, and causes even more arterial stiffening.

The result is decreased blood flow to the vital organs, including the brain. This symptom is linked to cognitive decline associated with Alzheimer’s disease.

According to the study abstract, arterial tonometry measures include carotid-femoral pulse wave velocity, central pulse pressures, and other metrics important to the study. The authors conclude that because tonometry is a relatively simple, noninvasive study, it may provide a readily accessible screening to identify young adults who can benefit from hypertension and vascular treatment.

The study was a collaboration between several medical research institutions, including UC Davis, the Farmington Heart Study, and Boston University. UC Davis is one of only 27 research centers designated by the National Institutes of Health - National Institute on Aging.