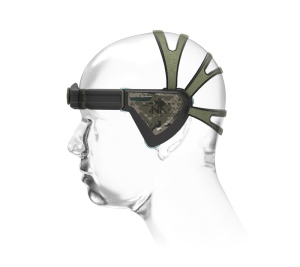 A biomedical engineer who had his own high school football experience cut short due to concussion has led a team to develop an ultrasound headset that may diagnose brain injuries from the sidelines. The headset — called a transcranial Doppler device or TCD — was designed in response to a lack of good data about brain blood flow as a result of injury.

“The first step to the management of any condition is to help doctors identify who has a concussion and who doesn’t,” Robert Hamilton, Ph.D., Chief Science Officer at Neural Analytics and lead author, told HCB News.

“Research is starting to show that blood flow regulation is dysfunctional following a concussion. Unfortunately, doctors are limited to mainly subjective symptom evaluation," said Hamilton. "We are trying to provide doctors more physiologically based tools to help them better manage their patients.”

When attached to a patient suspected of having a concussion, the TCD ultrasound device analyzes blood flow in the brain (similar to a fetal ultrasound). As the heart pumps, the corresponding blood flow has slight variation from beat to beat. This data is recorded on a laptop and then analyzed by a proprietary algorithm.

The “machine learning advanced ultrasound” generates a blood flow score in five minutes. In the future, an attending doctor, trainer or coach can possibly rely on this data to help determine if an athlete has had a concussion.

Hamilton will present the results of his team’s research today at the American Academy of Neurology’s (AAN) 68th Annual Meeting in Vancouver, Canada. The study has received support from the National Institutes of Health and the National Science Foundation.

In the study, TCD scans from 66 high school athletes recently diagnosed with concussion were compared to a baseline of 169 high school students who played contact and non-contact sports. The TCD measures how the blood moves through the middle cerebral artery, one of three major arteries in the brain.

The TCD was able to identify a concussion in 83 percent of cases, compared to 53-60 percent of the time relying on traditional ultrasound measurements. Hamilton said they are currently making upgrades to the TCD, intended to improve accuracy.

"While such changes may be detected with MR, we believe there may be a less expensive and portable way to measure these changes with a transcranial Doppler (TCD) device," said Hamilton.

According to the AAN, more than a million athletes suffer a concussion every year. Hamilton said that his research has also been motivated by concussions suffered by military members fighting in the Middle East. In addition to studying concussion, he added that the technology could also help in studying and identifying Alzheimer’s and other dementia disorders, as there is a link between blood flow and these conditions as well.

Hamilton said that it can be very difficult for the athlete, coach, and doctor to correctly evaluate the risk of a concussion.

“People tend to brush off head injuries with minimal symptoms like headache,” he said “We are trying to provide doctors and coaches with better information so they can understand these injuries in the future and not just rely on how someone feels to make management and return-to-play decisions.”