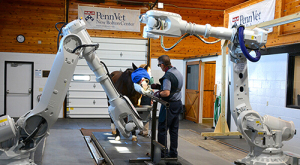 Could allow for imaging patients
while they are moving
The technology behind a new imaging system developed for horses, recently installed at the University of Pennsylvania School of Veterinary Medicine (Penn Vet), has the potential to eventually be used to image human patients while they are standing and moving, possibly eliminating the need for anesthesia or rigorous restraint for children.

Experts from Penn Vet, as well as Penn Medicine and the Nemours Children’s Health System, are in the process of embarking on a collaborative effort to identify applications in human medicine.

With conventional imaging systems, both for horses and humans, patients are generally examined while lying down. This limits the accuracy of the diagnosis if the clinical condition is caused by load-bearing movements, says Dr. Barbara Dallap Schaer, medical director at New Bolton Center.

“You can see anatomical abnormalities, but it might not necessarily be the abnormality that’s causing the pain,” Dallap Schaer told HCB News.

The technology creates the potential for a system that would acquire images of people when they’re moving dynamically, which could be particularly useful for examining the musculoskeletal system for adult as well as pediatric patients.

The device has an open construction, using robotic arms that move around the horse while it’s standing. In systems with an enclosed gantry or a C-arm, horses must be anesthetized before being imaged while lying down.

“From an imaging perspective, the horse is a pretty challenging patient compared to a person,” Dallap Schaer said. “It’s not a patient who’s voluntarily compliant.”

When using EQUIMAGINE, the horse is simply sedated, and while the animals occasionally sway during the exam, the system is able to overcome this with motion correction technology.

“If you had that degree of motion in many of the current systems, you would have to repeat the imaging, or anesthetize the patient,” Dallap Schaer said. “The image quality is better than others we’ve seen in standing, awake horses.”

The system provides two-dimensional and three-dimensional images, as well as 360-degree digital radiographic studies, and captures fluoroscopic images at up to 16,000 frames per second. The facility will also explore tomosynthesis with the system.

“It’s a great opportunity for us to validate our work with renowned academics, surgeons, radiologists and radiographic technicians,” said Yiorgos Papaioannou, 4DDI’s chief executive officer, in a statement.

While the partnership may seem unusual, it’s par for the course in veterinary medicine.

“There’s a great deal of partnership that occurs between veterinary and human medicine,” Dallap Schaer said.