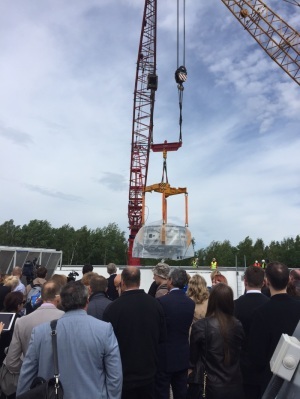 On Monday night I flew to St. Petersburg Russia to participate in a ceremony to lift a 90,000 metric ton cyclotron. It was lowered into place by two special cranes. There were four TV stations, a senator, health minister and all sorts of local government dignitaries present for the occasion.

One of my main takeaways was the extent to which the community and the government here supports health care delivery. I don't feel it's that way in the U.S. where, if anything, our government seems to make it harder for health care providers.

Perhaps overall, the U.S. has become a hard pace to do business. They built the Empire State building in one year — but after 15 years the Freedom Tower is still not complete.

After hurricane Sandy, the New York City government supported our health care institutions but that was only because it was an emergency. In the case of the Russian proton center the government tried to do all that they could to help this new center; they helped supply water and electricity and permits and roads.

No country is perfect. No government is perfect. While I believe the U.S. health care system is one of the best on the planet, I think it's also the most complicated to navigate. I wish we could learn from each other.

Getting back to the proton center, it is expected to be treating patients in December 2017. It will have taken four years to find the land, clear the land, build the building, install the equipment and commission the equipment.

I think everyone agrees that proton therapy is the best treatment option for children and adolescents with complex cancer cases and I'm proud to be part of this project.

By way of full disclosure, I'm an investor in this center which we purchased from Varian.