Pay gap found between black and white doctors — but is the research based on bad data? 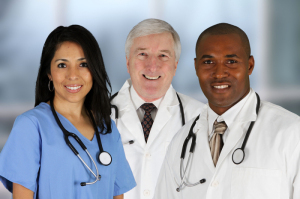 Study also points to major
earnings disparity between men
and women
The headlines are blaring: U.S. white male doctors may make as much as 35 percent more than their black counterparts. But the study that uncovered the startling discrepancy is not without its critics.

The authors themselves acknowledged in their report that there are limitations to their study. Nonetheless, they argued that it does, "highlight large disparities in income between white and black male physicians, and even larger disparities between male and female physicians."

The findings come from a study led by Ruth L. Newhouse and Anupam Jena of Harvard Medical School that was recently published online in the BMJ. It looked at income broken down by race and sex and the researchers concluded that their findings "highlight large disparities in income between white and black male physicians, and even larger disparities between male and female physicians," according to a BMJ statement.

The researchers adjusted for age, hours worked, experience, and revenue from social insurance such as Medicare and Medicaid. Their data was drawn from two nationally representative surveys — the 2000-13 American Community Survey (ACS) and the 2000-08 Center for Studying Health System Change (HSC) physician survey.

They also adjusted for specialty — and there is the rub, William Weeks, a health economist and physician at Dartmouth College's Geisel School of Medicine, told the Washington Post. “A significant part of the data the finding depends on didn't identify whether the doctors were primary care doctors or specialists,” according to the paper.

According to a 2015 study in JAMA by Dr. Curtiland Deville and a research team “total graduate medical education was significantly different for all [demographic] groups” — with black doctors found in fewer numbers in higher-paying specialties.

Weeks's own investigations have found no such racial pay gaps. "This is really not good research," Weeks commented to the Post. "It's a poor design. It's a poor study. It should be ignored."

To boost the size of their black physician samples, the study employed a lot of physician earnings data from the census. For 40 percent of the doctors — and nearly half of white male physicians — incomes were estimated.

The researchers examined income data of both physicians and non-physicians to arrive at earning levels and census data, which also has no information about whether a doctor is in primary care or a specialty, according to the paper.
1(current)
2