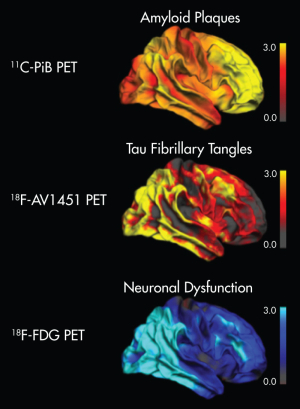 Research receives 'SNMMI
Image of the Year' Award
A German team of researchers presenting at the annual SNMMI meeting in San Diego presented findings examining the correlation between amyloid, tau aggregation and metabolic activity in those suffering from Alzheimer’s.

While such a correlation has long been suspected, previous evidence has relied on post-mortem study obtained through autopsy. The new research provides confirmation in living patients, and that evidence contributed to the group receiving the SNMMI Image of the Year Award for their work.

“Adding tau-imaging may help us now to understand factors leading to the actual onset of neurodegeneration and possibly also to document effective treatment,” Dr. Alexander Drzezga, professor and chair in nuclear medicine at the University of Cologne, Germany, told HCB News. “Our results indicate that tau-pathology may be very tightly linked to neuronal dysfunction in Alzheimer's disease…and could possibly be causally involved.”

According to Drzezga, the findings suggest that targeting the build-up and propagation of tau-pathology in the brain may impact the progression of the disease. He also said that monitoring the development of tau-pathology (in amyloid-positive patients) might represent an interesting biomarker to aid in the prevention of the symptomatic onset of Alzheimer's disease.

“Using the three PET tracers in living patients offered a unique opportunity which has not been available in the past,” he told HCB News. “Tau-imaging seems to be closely linked to actual onset of neuronal injury, whereas amyloid-imaging may allow us to detect a predisposition to disease years ahead of the onset symptoms.”

SNMMI received more than 2200 abstracts for the 2016 Image of the Year competition. The winner is selected by a vote of reviewers and the SNMMI society leadership.

“I was extremely honored and proud of my team,” Drzezga said. “This work has only been possible on the basis of an interdisciplinary effort involving several clinical and scientific partners and this award represents a great motivation for this entire group. I am particularly happy that the young investigators of our group involved in this study are now so specially rewarded for their work.”

According to Alzheimer’s Disease International, the economic cost of Alzheimer’s globally will reach $1 trillion by 2050. Currently 46 million people worldwide suffer from Alzheimer’s, but that number is expected to nearly quadruple over the same time period.

“We still do not understand fully how these abnormal amyloid and tau protein deposits affect brain function and cause dementia,” said Dr. Satoshi Minoshima, Ph.D., chair of the SNMMI Scientific Committee, in a statement. “This Image of the Year study begins to address that fundamental question.”