Are you voting for Donald or Hillary? 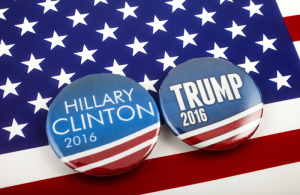 In the upcoming election, you only have three choices:

If you do not vote for Donald or Hillary, in my opinion, you are throwing away your vote.

I agree with some Libertarian policies and some Green Party policies but I do not think now is the time to make a statement because I cannot remember a time, in my life, when two candidates have been so completely different.

There has always been the sense that Democrats want to raise taxes and provide more services and the Republican want to lower taxes and provide fewer services. But historically, I always had the feeling that one politician was not much different than another.

It is generally agreed that the Republican Convention painted a bleak picture of our country but I do not agree that the country is bleak.

The Democratic Convention seems to be painting a brighter view of the world. I heard someone say, "There is nothing wrong with America that cannot be cured by what is right with America." And I agree with that.

Some people say they do not trust Hillary but I am not sure I have the feeling that I trust Donald Trump either.

Men have run our country for 240 years. It would be interesting to see if a woman could do a better job. I know that Angela Merkel is doing a great job in Germany and God knows she has her share of challenges and Theresa May is now going to be challenged with pulling Britain out of the EU. Maybe the voters in the United States will decide it is time to give a woman a shot.

Whatever you think, if you vote, you will not have any regrets. At least you know you did not waste your vote so I encourage you to register, pick one of the two candidates you most agree with and vote for that person.