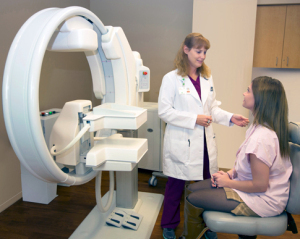 Molecular breast imaging (MBI) detected cancer in several women with dense breasts whose mammograms had been negative, with an incremental cancer detection rate of 7.7 per 1,000 screens, a study has found.

The retrospective study, published in the August issue of the American Journal of Roentgenology, examined data from the supplemental screening program at ProMedica Breast Care in Toledo, Ohio, from 2011 to 2014. After having a mammogram, 1,696 women with dense breast underwent supplementary screening with Gamma Medica’s LumaGEM MBI system, which uses the technetium-99m sestamibi radiopharmaceutical and employs a dual-head digital detector and a special collimator. This resulted in the detection of 13 malignancies, after the mammograms read negative for cancer.

The lesion size ranged from .6 to 2.4 centimeters, with a mean of 1.1 centimeters. About 85 percent of the cancers were node negative, which means the prognosis was better.

“We found them early and they would have otherwise gone undetected by mammography,” Shermis said.

The study also found that the positive predictive value (PPV) for recall was 9.1 percent and the PPV for biopsy was 19.4 percent.

“MR is a great test, but it’s very expensive and insurance companies won’t pay for it unless you’re high risk,” Shermis said.

“This new study in the AJR provides further evidence that women with dense breast tissue have more comfortable and less stressful alternatives to standardized secondary screening studies,” said Philip Croxford, chief executive officer of Gamma Medica, in a statement. “These recent clinical results suggest there is a real alternative to the risk of misdiagnosis and unnecessary biopsies.”

The study by ProMedica follows a study by the Mayo Clinic, published in the AJR last year, which found the addition of MBI to mammography increased the invasive breast cancer detection rate 363 percent, from 1.9 to 8.8 per 1,000 screens.

MBI uses 6 to 8 millicuries, about four times the dose from a digital mammogram, though Shermis said it’s possible to cut the dose in half by scanning for twice as long. While some breast cancer experts don’t recommend MBI for annual screening because of the higher dose, Shermis noted that it was important to weigh the risks with the benefit of detecting cancers earlier.

“Six thousand women, who know the benefits and risks, have yet to say ‘I don’t want it,’” Shermis said.